The second most common blood cancer in the U.S. is multiple myeloma. Despite treatments, like drugs that attack weaknesses in the cancer cells, the disease often recurs, even if remission is achieved the first time.

But researchers from UC San Diego recently announced that they have developed designer DNA that kills cancer stem cells at their roots — and the technique has shown early signs of success in preventing cancer from returning in mice.

Cancer is caused when abnormal cells in the body divide uncontrollably. Multiple myeloma cancer affects the white blood cells in the bone marrow, causing severe bone pain, anemia, and problems in the kidneys.

The National Cancer Institute estimates that there were more than 32,000 new cases of multiple myeloma in 2020, with 54% surviving just five years. Patients with multiple myeloma cancer often relapse because the cancer becomes resistant to the treatment. If treatment doesn’t destroy all of the abnormal cells, then there is a good chance the cancer will come back stronger.

Studies have shown a connection between the synthesis of proteins, known as IRF4, and low patient survival rates. So a team of researchers led by Leslie Crews, a professor in the Division of Regenerative Medicine at UC San Diego School of Medicine, found a way to regulate the genes that encode the IRF4 protein — silencing them altogether.

They did this by engineering a synthetic piece of DNA called an “oligonucleotide.” The small section of artificial DNA is designed to bind the gene that codes for IRF4 (the protein that is linked to low survival rates). Once it’s bound to the encoding gene, it should shut down production of the “bad” protein altogether. The oligonucleotide, known as ION251, is developed by the biotech company Ionis Pharmaceuticals.

To test the designer DNA, they first transplanted human multiple myeloma cancer cells into 20 mice. Then they dosed half the mice with the treatment that contained the engineered the oligonucleotide every day for various times from 2-6 weeks. The other mice were given a placebo.

They found that using the oligonucleotide to block IRF4 thwarted multiple myeloma stem cells’ survival. The designer DNA therapy essentially killed the harmful cells while sparing the healthy cells. And 70-100% of the mice in each group that received the designer DNA treatment survived, whereas none of the untreated mice survived. They published their findings in Cells Stem Cell.

“The results of these preclinical studies were so striking that half the microscopy images we took to compare bone marrow samples between treated and untreated mice kept coming back blank — in the treated mice, we couldn’t find any myeloma cells left for us to study,” said Crews.

They are now recruiting volunteers for a Phase 1 clinical trial to assess the oligonucleotide’s safety in a collaboration between Moores Cancer Center at UC San Diego Health and Ionis Pharmaceuticals. 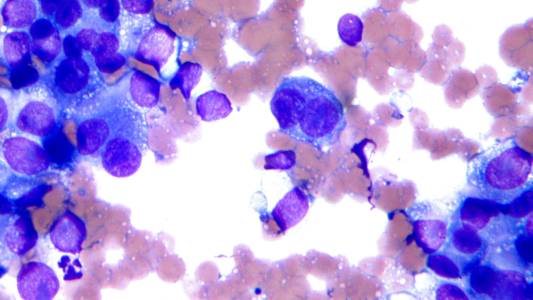 A personalized skin cancer vaccine developed from melanoma survivors’ own tumor cells has shown promise in a small trial.

Medicine
Personalized skin cancer vaccine is made from tumor cells
By Kristin Houser
Subscribe to Freethink for more great stories
Subscription Center
Sections
Video
Freethink
Subscribe
We focus on solutions: the smartest people, the biggest ideas, and the most ground breaking technology shaping our future.
Subscribe