Researchers at UC-Berkeley have built a machine to project experiences directly into the brain. Eventually, they hope to insert (or edit) sights, sounds, sensations, and possibly even memories for patients with brain damage or disabilities. As one Berkeley neuroscientist put it, “By encoding perceptions into the human cortex, you could allow the blind to see or the paralyzed to feel touch.” … Or maybe you could build the Matrix.

The Machine: The scientists are working in a cutting-edge field called “optogenetics,” where light is used to turn on or off neurons in the brain. First, the Berkeley team treated a sliver of brain cells (just half a millimeter wide and one tenth a millimeter thick) with a protein that switches neurons on or off when they’re hit with a beam of light. That’s pretty neat. But the real breakthrough was creating a device that could hit individual neurons, with pinpoint accuracy, without activating the rest. Their machine, called 3D-SHOT, fires infrared lasers through a holographic screen—basically, bending the laser beams to intersect at a very specific point in space, hitting precisely one brain cell. Right now, it can activate 50 different neurons at the same time, up to 300 times a second—fast enough and precise enough to mimic actual brain patterns.

The Real Brilliance: The Berkeley team didn’t invent the underlying technologies, but they improved and assembled them in a way that works. They made a better protein for making neurons switch on or off, and 3D-SHOT is much more precise than any other “deep brain photostimulation” machine. “This is the culmination of technologies that researchers have been working on for a while, but have been impossible to put together,” one of the lead scientists said. “We solved numerous technical problems at the same time to bring it all together and finally realize the potential of this technology.”

Applications and Next Steps: The potential medical applications are huge: being able to simulate sensory experiences that disease or injuries have made impossible. A “neural prosthetic” like this could allow people with prosthetic limbs to feel what they’re touching. Blindness, deafness, or peripheral nerve damage could be circumvented directly. But before they can even consider artificially reproducing those feelings, researchers first need to know what the neural patterns for those experiences actually look like inside the brain. Other scientists have already begun cracking the code of brain language with respect to memory, so this is definitely an achievable near-term goal.

Messing with Mice: The Berkeley researchers think they can scale up their device to activate hundreds or thousands of neurons at the same time, and they’ve already been testing it on lab mice, firing into the vision and touch centers of the cortex while they walk on a treadmill. The mice haven’t done anything interesting yet, physically, but real-time brain imaging suggests they are having what looks like a sensory experience.

The Limits Are Skin Deep: The biggest limitation of the technology is that you can’t fire infrared light very precisely very deep into the brain. The mice needed to have a, uh, “clear window into the brain” installed for the device to hit anything at all. And, according to their previous paper, 3D-SHOT loses accuracy and energy after penetrating just half a millimeter into brain tissue. Using more powerful lasers could potentially solve the depth issue, but at the cost of accuracy. Solving that is likely to be the biggest hurdle to building the Matrix practical real-world applications.

Related Video: Our Cyborg Future Is Coming (And That’s Not a Bad Thing) 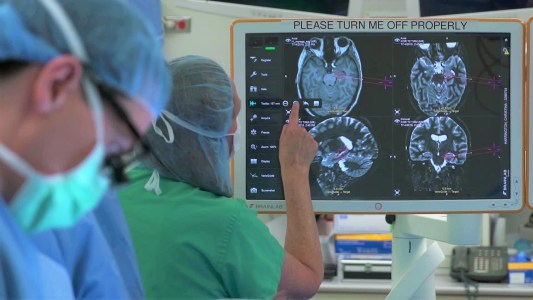 Scientists have figured out how to hack the brain’s memory.

Brain
A prosthetic memory can help you remember
Subscribe to Freethink for more great stories
Subscription Center
Challenges
Video
Freethink
Subscribe
We focus on solutions: the smartest people, the biggest ideas, and the most ground breaking technology shaping our future.
Subscribe