Nuclear diamond batteries are the size of a fingernail, but don’t let that fool you — these batteries can last for thousands of years while helping us recycle waste from our nuclear power plants.

Nuclear batteries (known scientifically as betavoltaics) have been around since the 1970s, but no one has really had much use for them — however, with the explosion of micro-electronics, that could soon change.

A team of researchers from the University of Bristol has discovered how to make nuclear batteries far more efficient (and safer) than what we had in the 1970s — by turning the nuclear waste into electricity-generating diamonds.

In August, they founded the startup Arkenlight to commercialize the diamonds — and they’re expected to hit the market in 2024.

Endless Power! (…Just Not Very Much Of It.)

As dramatic as “nuclear diamond batteries” sound, don’t expect them to power your car or even an iPhone. Lithium batteries (which power most of our gadgets) generate a lot of power for a short amount of time but need to be recharged frequently. Nuclear batteries don’t put out nearly as much power. Instead, they produce a little bit of power for a really long time — potentially thousands of years.

Arkenlight says its nuclear diamonds can be used where it’s difficult or impossible to recharge or replace batteries — like satellites in deep space, or sensors dropped into volcanos and deep-sea trenches.

But any device that is currently being powered by microbatteries could benefit from the longevity provided by these diamonds, from wearables to smoke detectors.

However, the most significant application may be powering medical implants, like a pacemaker or hearing implant. Today, most implants rely on lithium batteries — but it can be life-threatening if these batteries don’t get recharged or replaced. Nuclear diamonds could solve this problem.

“We’re constantly getting emails from people who have all sorts of implants. If you can provide them with a solution where it’s fitted to last for decades, or even for a lifetime, then that’s got to be worth something,” Neil Fox, founder of Arkenlight and scientist at the University of Bristol told Seeker.

The problem is that the shape of the batteries — with the material sandwiched between the semiconductors — hasn’t been very efficient. The farther the radioactive material is from the semiconductor, the less power it produces, so thicker batteries are actually weaker; as Wired notes, “If the layers of the battery are more than a few microns thick, the power of the cell will plummet.”

This means that most nuclear batteries have a dismal 7% efficiency, Lance Hubbard, a scientist at Pacific Northwest National Laboratory, told Wired.

Arkenlight’s scientists discovered how to make nuclear batteries more efficient — and safer — by tweaking the radioactive material and the design of the battery.

Many nuclear power plants use graphite blocks (made of carbon) to slow down the nuclear reaction, creating the isotope carbon-14 as a byproduct. The best thing about carbon-14 is that it can serve as both a radioactive fuel and a semiconductor.

The inside is hardly radioactive at all, and that makes them very safe for people.

The Arkenlight team pressed the carbon-14 into a crystal diamond — just like those on engagement rings. With a unified shape instead of layers, the diamond can produce and store charge in one spot, making the battery a whole lot more efficient.

“Up until now, the radioactive source has always been discrete from the diode (semiconductor) that receives it and converts it into electricity,” Morgan Boardman, Arkenlight’s CEO, told Wired. “This is groundbreaking.”

There are tons of these graphite blocks all over the world, so we could have an almost endless supply of material for these batteries. Plus, by extracting carbon-14, the blocks become a lot less radioactive, so disposing of them becomes a lot safer.

Having a radioactive powered battery near you probably doesn’t sound too appealing, but experts say the health risks are extremely low — in fact, the dose of radioactivity in a carbon-14 diamond is lower than that of a single banana.

“Usually just the wall of the battery is sufficient to stop any emissions,” Hubbard told Wired. “The inside is hardly radioactive at all, and that makes them very safe for people.”

The diamond shape adds a safety measure, too — the strength and rigid structure of the diamond mean very little can break it. 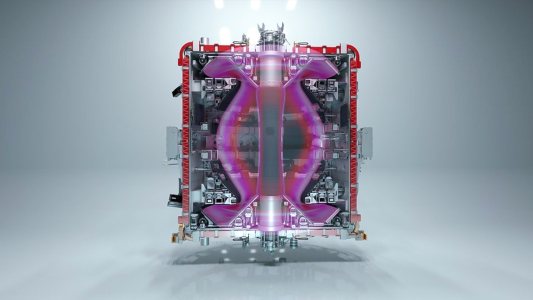 A new spherical tokamak in the U.K. could overcome one of the biggest hurdles to nuclear fusion power: the “exhaust problem”