Drug-resistant superbugs have threatened human health for decades. The situation is getting worse because of the shortage of new antibiotics. But what if we changed the way we aim to treat them, and trained our cells to kill these invaders instead of relying on antibiotics to do the dirty work? This new strategy, called host-targeted defense, could help to solve antibiotic resistance problem.

Antibiotic resistance is a growing concern for global health. A recent report commissioned by the British government shows that every year globally around 700,000 people died due to infections caused by drug-resistant bacteria. The report also warned that, without action, the death toll could rise to 10 million globally and cost US$80 trillion to the global economy.

Drug resistance is a serious problem in the United States too. More than 23,000 people die every year due to multidrug-resistant pathogens and cost the country around $55 billion per year. The main culprits threatening the U.S. are methicillin-resistant Staphylococcus aureus (MRSA), carbapenem-resistant Enterobacteriaceae (CRE) and Clostridium difficile.

The shortage of new antibacterial drugs in development to tackle the growing threat is a disturbing trend. A pathogen that is resistant to a drug reserved to treat infections when all others have failed is a particular concern. This is the case with carbapenem-resistant pathogen.

In Malay Haldar’s lab, along with other projects, my colleagues and I are studying how factors in an animal host play a role in response to infections. To test the approach, we are doing this work using a mouse model of infections. Our aim is to find novel traits or factors of the host that can be targeted to boost an individual’s immune response high enough to kill the offending microbes. The host factor we are investigating is called Spi-C, a gene found in every cell of the human body.

My interest in host factors arose during my graduate studies. While working on my Ph.D. research project, I learned that host factors, a variety of traits intrinsic to humans, play a significant role in bacterial infections. This inspired me to investigate how the host’s immune system fights bacteria.

New insights into the host’s defense against pathogens have led researchers to explore a new strategy called host-directed therapy (HDT), a relatively recent idea that has only been around for about a decade.

The goal of HDT is to enhance and amplify the host’s immune response to kill pathogens, rather than relying exclusively on antibacterial drugs. By targeting host factors as well as delivering antibiotic treatment, HDTs deliver a double whammy.

The body naturally responds to infections with inflammation, a process in which specific populations of immune cells attack and kill the invading bacteria by either eating them or zapping them with protein weapons. However, uncontrolled inflammation triggers the production of proteins that can cause multi-organ failure and can even kill the host. Therefore, controlling inflammation is crucial to combat pathogens as well as to protect the body from hyperinflammation.

HDTs include a suite of treatments that boost the host response to pathogens and also protect the host from exaggerated immune response. HDTs include cellular therapy, in which a specific population of bone marrow cells are injected into the host body to prevent excessive immune response and tissue injury. Another HDT involves commonly used drugs for noninfectious diseases. Statins and ibuprofen, for example, calm the host response to infections. Biologics, the complex molecule drugs produced by recombinant DNA technology, do this too by neutralizing small-sized proteins and reducing tissue damage. Nutritional products, such as vitamin D3, have also been shown to cause a host’s immune cells to release antibacterial substances that enhance pathogen killing.

HDTs in conjunction to antibacterial drugs show great promise in treating various multidrug-resistant pathogens, notably against Mycobacterium tuberculosis, the pathogen which causes tuberculosis, one of the top 10 causes of death worldwide.

In the last decade, researchers have made much progress in host factor research, leading to new therapeutic strategies.

One of them is personalized medicine, in which a genomic blueprint can determine an individual’s unique susceptibilities to diseases and choose appropriate therapies.

This concept is applied in noninfectious diseases like cancer. However, the application of the concept in infectious disease is very recent. Nonetheless, personalized medicine leads us to speculate why some individuals are more prone to infections than others. My colleagues and I believe that such differences may be caused by subtle differences in the DNA of the host factor genes. By connecting these differences, called polymorphisms, to the level of individuals’ vulnerability to infections, we hope that our research will contribute to the precision medicine of bacterial infections.

Our quest for a novel host factor

My colleagues in the Haldar lab and I are exploring the role of Spi-C in bacterial infection. Spi-C is essential for the development of a specific type of population of cells in the spleen that regulate the iron storage in the body. Iron is essential for transporting oxygen in red blood cells.

But, during infections, bacteria also require iron. They need it for growth, and they compete with the host to get it. Hence, if we could alter the activity of the Spi-C gene, we might be able to deprive bacteria of this vital nutrient and thus stop the infections without harming the host.

In a recent paper, we summarized the effect of iron in host cells and its interactions with host factors in the presence or absence of infections.

In mice, we tested the role of host factor, Spi-C, as a way to defend the host. In this study we injected a chemical that is a component of the bacteria into the mice. We wanted to trigger changes that occur in the animal during a real bacterial infection.

Our preliminary results showed that the host factor is active in various organs of the mice treated with the chemical. We believe this activation plays a role in host-defense. And, indeed, we found that losing Spi-C activity increased the release of small-sized proteins that facilitate the host defense against pathogens compared to the cells that have normal Spi-C activity. We believe this change in small-sized proteins might protect the host from hyperinflammation in response to infection.

We believe that shifting of our thinking from pathogen-targeted therapy to host-directed therapy ushers in a new avenue of precision medicine, which could help to end the drug resistance crisis.

Zahidul Alam is a Postdoctoral Fellow at the University of Pennsylvania. This article first appeared at the The Conversation. 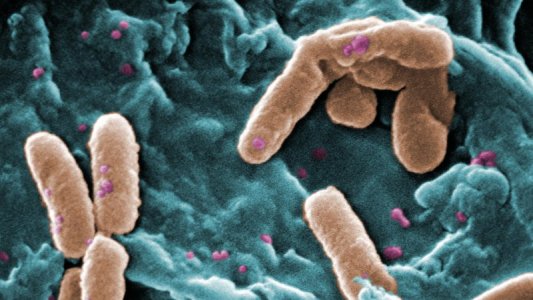 What you need to know about this genetic disease, explained by someone who knows it inside and out.

Healthcare
What is cystic fibrosis—and what is it like?
By Ella Balasa
Subscribe to Freethink for more great stories
Subscription Center
Sections
Video
Freethink
Subscribe
We focus on solutions: the smartest people, the biggest ideas, and the most ground breaking technology shaping our future.
Subscribe