The physical basis for memory is a mystery, but it’s long been thought to be simply a pattern of signals played across the synapses between brain cells. But an experiment at UCLA suggests that at least some information is stored inside brain cells, in RNA—and you can physically extract it and transfer it into another organism. This discovery could potentially fill in many of the gaps in our theory of how memories are created, stored, recalled, and ultimately lost.

Memory Music: You know that maddening feeling where you can almost-but-not-quite remember something? Concentrating, squeezing your eyes shut, maybe even gripping your head—you know it’s in there, somewhere! The entire field of neuropsychology has been doing that for decades now, on a frustrating quest to figure out precisely where our memories are in the brain.

We know memory is a physical phenomenon—it can be lost through physical damage and diseases like Alzheimer’s—but the brain is complicated, and it could potentially store information in lots of different ways. Memory storage has something to do with the physical structure of synapses between brain cells, and with the patterns of chemical and electrical signals that fire across them. In that view, memory is less like a box of papers and more like music playing over the brain—a pattern of activity, rather than a physical thing. But a few scientists think that information from our experiences could also be coded and stored inside neurons using RNA, the chemical that transcribes DNA and does other important tasks inside the cell.

The Experiment: To test the RNA theory, biologists at UCLA trained marine snails by giving them electric shocks. Trained snails learned to be more sensitive to being touched, as a defense mechanism. A snail that has been shocked will contract for about 50 seconds after being tapped, whereas a normal snail will only contract for about one second. After waiting a day, researchers then extracted RNA from the nervous system of the trained snails and injected it into a test group. The test snails showed the same defensive reflex as the trained group, contracting for about 40 seconds—they “remembered” shocks that happened to their RNA donor, and behaved accordingly. A transfer from a control group did not cause any changes in behavior.

Hmm… Is That Really “Memory”? To narrow down how the RNA was affecting the snails, the scientists extracted motor neurons, which are responsible for actually causing the physical contraction, and sensory neurons, which are responsible for experience. The cells were placed in a Petri dish and then treated with RNA from trained snails and untrained snails. The trained RNA caused “increased excitability” in the sensory neurons—just like in snails that are being shocked directly—but not in the motor neurons. (The untrained snail RNA caused no changes at all.) The authors believe this means that RNA is transferring something experiential, not simply a chemical that makes it easier for motor neurons to cause contractions.

The Upshot: The study is intriguing, and the authors naturally think it’s a smoking gun that memory is stored inside brain cells. “If memories were stored at synapses, there is no way our experiment would have worked,” says the lead UCLA researcher, David Glanzman. But it’s important to keep it in perspective. We don’t really know what kind of RNA is causing the behavior (there are several types), or what changed about it in the electrocuted snails.

We also don’t know how common this type of storage might be, or what kinds of experiences or behavioral responses might be retained this way. After all, “contract when startled” is pretty simple compared to, say, kung fu, who your cousin is, or even where you left your keys. Until we know more, there’s no reason to abandon the traditional view that memory is at least mostly a function of patterns in brain activity. But this extra component might help fill in some of the gaps in how we understand and treat brain disorders. 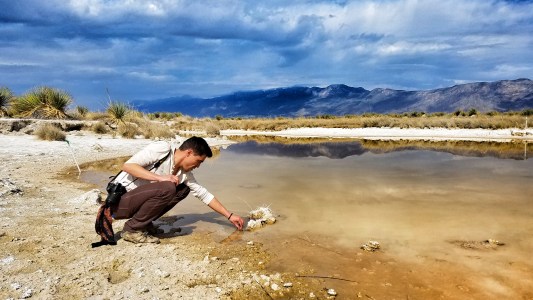 The world discovered phages before antibiotics, but these lowly sewer viruses are getting renewed attention in the…