What if you could rewrite the entire human genome from scratch? What would you fix, improve, or upgrade? That’s the question at the heart of Genome Project-write (GP-write) an alliance of 200 scientists who are tackling the most ambitious idea in genetics. Their first goal, they decided this week, will be modest: creating cells that are impervious to all viruses.

“Synonyms” in DNA: Broadly speaking, bodies are made of tissues and organs, which are made of proteins. Proteins, in turn, are made of long strings of smaller molecules called amino acids. DNA is essentially an instruction book, written in three-letter “words,” that tells your cells what amino acids to string together, in what order, to make proteins. I’ll spare you the math*, but it turns out that there’s a few “synonyms” in DNA for all 20 amino acids. For instance, the DNA word for the amino acid valine can be spelled GTT, GTC, GTA, and GTG. You only need one of these spellings to make it, but, in nature, life evolved to spell it a few different ways.

Editing Out the Redundancies: The scientists’ great insight was that if you rewrote a book to get rid of all the synonyms, you wouldn’t change the meaning, but you could instantly tell if someone else had inserted a new page or paragraph later on. That’s essentially what viruses do when they invade a cell and try to rewrite its DNA instructions to make more viruses. So if you rewrote the genome and a virus attempted to use a synonym that no longer existed, the cell simply wouldn’t know what to do, and therefore couldn’t make more viruses—stopping the infection in its tracks.

Scaling Up: When a group of scientists tested this theory by replacing one redundant word throughout a cell’s entire genome, it became totally resistant to a virus that used that word. When they scaled it up to replace seven redundant words, it worked … but they had to make over 62,000 edits to the genome. To get rid of all the synonyms in the human genome, they’d have to edit 400,000 places in all 20,000 human genes. That would take way too much time, even using fast gene-editing techniques like CRISPR.

Making DNA from Scratch: Instead of just searching and editing DNA one word at a time, they want to rewrite the entire genome from scratch, one letter at a time. It’s possible to make DNA like this, but it’s insanely expensive right now: writing ten letters costs about a dollar, and we can only write 200 letters at a time. To rewrite all 3 billion letters in the human genome would cost at least $30 million. But the GP-write team hopes they can bring down that cost by a few orders of magnitude, until this technique is a practical way to make customized cells that are totally resistant to viral infections.

But… Why? The notion here isn’t to grow completely new human beings using the rewritten genome. Instead, scientists foresee using this technique to make stem cell therapy safer, by essentially “pasteurizing” cells that are put back into the body, making them impervious to viral infections. For instance, with cancers caused by viruses, you could replace cancerous tissues (as is currently done with bone marrow) with stem cells that cannot be re-infected by the virus that caused the cancer in the first place.

You Can’t Outsmart Evolution … Can You? The reason why viruses have evolved to use the full vocabulary of the human genome, synonyms and all, is because that’s what works. If you can rewrite human DNA to get rid of the synonyms, that would effectively block all known viruses, which would be an incredible achievement, but it probably wouldn’t put an end to the cycle of viral infections and resistance that all life has been trapped in for billions of years. There’s no obvious reason why viruses couldn’t or wouldn’t adapt to use the more limited vocabulary that the GP-write scientists want to create. As the chemist Leslie Orgel once said, “Evolution is cleverer than you are.” And that means that we’ll probably never completely checkmate our viral foes.

Related Video: What Can Snot From Cancer Patients Teach Us About Evolution? 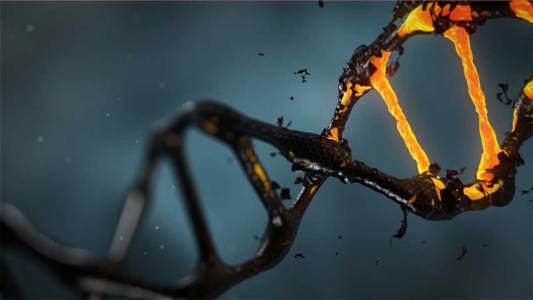 Genetics
Scientists finally get a look at enzyme that protects DNA
By Daniel Bier
Subscribe to Freethink for more great stories
Subscription Center
Sections
Video
Freethink
Subscribe
We focus on solutions: the smartest people, the biggest ideas, and the most ground breaking technology shaping our future.
Subscribe