The nature of consciousness is one of the biggest puzzles in the universe (right up there with quantum entanglement and the Fermi paradox), but a newly published study on monkey brains has scientists both one step closer to solving it — and potentially even on the path to a treatment that could bring people out of comas.

So, what is consciousness? Humans don’t move through the world like robots, simply collecting data and reacting to stimuli. We feel things. We have experiences and emotions. That state of being is consciousness.

Simple enough. But ask a scientist to tell you any hard truths about consciousness — beyond the fact that it’s, like, “a thing” — and you’re probably going to come away disappointed.

That’s because, despite centuries of study, the scientific community hasn’t made much progress in cracking consciousness. Most researchers (though not all) assume it must relate to our brains, but the exact relationship between our inner worlds and our biology largely remains a mystery.

Any new discovery about consciousness is remarkable, but this study contains a truly mind-blowing advancement.

That may be changing. A new study in the journal Neuron details the discovery of an apparent on/off switch for consciousness in the brains of macaques, a type of monkey that’s biologically somewhat similar to humans.

The researchers, led by a team from the University of Wisconsin-Madison, recorded and analyzed the brain activity of the macaques while the animals were awake, asleep, and under general anesthesia, as well as while the monkeys were transitioning between the various states of consciousness.

All of that analysis led the team to hone in on two specific parts of the macaques’ brains as playing a key role in consciousness: the central lateral thalamus, a point deep in the forward-most part of the brain, and the cortex, which comprises the brain’s outer folds.

We might one day be able to reawaken the consciousness of people in vegetative states or comas — just by stimulating their brains in the right way.

Any new discovery about consciousness is remarkable, but the next part of the study is the truly mind-blowing bit.

The team placed the macaques under general anesthesia and — using electrodes they’d implanted into the animals’ brains — precisely stimulated their central lateral thalamuses. This stimulation snapped the macaques right out of their state of drug-induced unconsciousness.

“For as long as you’re stimulating their brain, their behavior — full eye opening, reaching for objects in their vicinity, vital sign changes, bodily movements and facial movements — and their brain activity is that of a waking state,” study co-author Yuri Saalmann explained in a news release. “Then, within a few seconds of switching off the stimulation, their eyes closed again. The animal is right back into an unconscious state.”

Not only does the study provide more evidence pointing toward the existence of a brain-consciousness connection, but it also hints at new potential uses of deep brain stimulation to treat disorders of consciousness.

In other words, we might one day be able to reawaken the consciousness of people in vegetative states or comas — just by stimulating their brains in the right way. 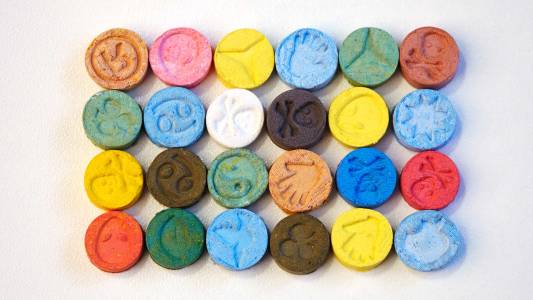 MDMA, also known as Molly or Ecstasy, is a synthetic psychoactive drug. MDMA effects include enhanced pleasure and a heightened sense of touch and sound.