To save the northern white rhino species from extinction, researchers want to turn stored rhino tissue samples into sperm and egg cells — and they just took a major step closer.

The challenge: The northern white rhino species is down to just two members: 33-year-old Najin and her 22-year-old daughter Fatu. With no males left for these ladies to mate with, the species is functionally extinct — when they pass away, their species will die with them.

In an attempt to avoid this certain fate, scientists with the BioRescue consortium have used frozen sperm from two male northern white rhinos to fertilize eggs harvested from Fatu. This has led to the creation of 22 embryos, which they hope to implant in southern white rhino surrogates (Najin and Fatu wouldn’t be able to safely carry a calf to term).

Genetic diversity is important to a species’ health, though, and researchers only have access to Fatu’s eggs and sperm from four male northern white rhinos — and several of the males are closely related to Fatu. Such limited genetic diversity may not be enough to sustain a healthy population in the long-run.

If they’re successful, they could increase the founder group of the future rhino population from just five animals to 12 and produce many more embryos than is currently possible, increasing the number of chances they’ll have to bring new rhinos to term in surrogates.

From there, these stem cells can be coaxed into developing into other, specialized types of cells.

Researchers had proven it was possible to make iPSCs from rhino tissue in 2011, but the next step had never been achieved before: the team needed to coax the rhino iPSCs into developing into to primordial germ cells (PGCs) — the precursor to sperm and egg cells.

“This is the first time that primordial germ cells of a large, endangered mammalian species have been successfully generated from stem cells.”

This had been done with mice before, though; using lessons from that research, the BioRescue team created a very specific environment for their iPSCs in which they were introduced to certain signals from hormones and proteins at specific times.

“Developing a culture system that delivers robust results has been extremely challenging since the precise orchestration of the specific signals required to induce the desired cellular differentiation is unique to every species,” said corresponding author Katsuhiko Hayashi.

The painstaking effort paid off. The team has now reported that it was able to create PGCs using skin cells from Fatu’s deceased aunt, Nabire.

“This is the first time that primordial germ cells of a large, endangered mammalian species have been successfully generated from stem cells,” said first author Masafumi Hayashi.

Looking ahead: The researchers now need to focus on maturing the PGCs in the lab so that they take the next step and become egg cells. (Sperm will come later since the researchers already have sperm samples from four rhinos, but only one egg donor.)

“The primordial cells are relatively small compared to matured germ cells and, most importantly, still have a double set of chromosomes,” said researcher Vera Zywitza. “We therefore have to find suitable conditions under which the cells will grow and divide their chromosome set in half.”

After that will come the process of fertilizing the eggs with sperm to create new embryos, which will be implanted into surrogate rhino mothers — and then, hopefully, the first baby northern white rhino born in a generation. 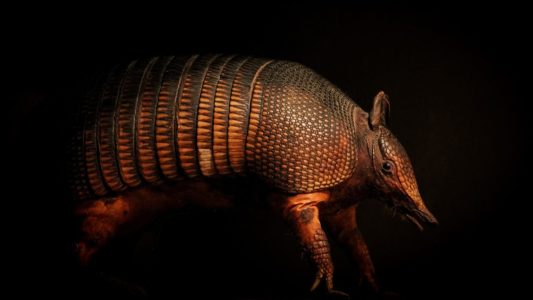 Biology
Armadillo experiment suggests that we can regenerate human livers with leprosy
By Peter Rogers
Subscribe to Freethink for more great stories
Subscription Center
Sections
Video
Freethink
Subscribe
We focus on solutions: the smartest people, the biggest ideas, and the most ground breaking technology shaping our future.
Subscribe