Using neuroscience to talk to people in a vegetative state 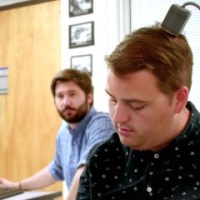 What’s It Like to Be in a Vegetative State?

Since a vegetative state is generally measured in months and years—as opposed to comas that typically last days or weeks—it can be taxing on family and friends that are eagerly waiting for their loved one to return to them and “wake up.”

But because vegetative state patients commonly move and respond to sights and sounds (albeit more as a reflex than an awareness of their surroundings), it’s easy to believe that recovery is possible, if not just around the corner.

In addition to sleeping and waking up, they may even pull their hands or limbs away if squeezed or otherwise poked or prodded. Their eyes may also randomly wander or track moving objects, and their breathing and heart rate are able to keep their body going without the assistance of machines. Other actions such as swallowing, smiling, and tearing up as well as groaning, grunting, or screaming are all common in vegetative states too.

But patients are unable to respond to commands (like “squeeze my hand if you can hear me”), and they do not react in meaningful ways to sounds, words, or any other type of communication. They also can’t speak their thoughts or express desires to anyone. Moreover, those in a vegetative state show no signs of understanding or emotion. They won’t recognize a family member, which has fueled the uncertainty about whether they are really “there.”

In some instances, patients can even start moving restlessly or intently, or produce strings of noises that are indecipherable. But mostly, they don’t show any of the typical signs of being present and conscious. And the possibility of being trapped inside your mind—aware of your surroundings, but unable to move or respond while your loved ones are right there—is a frightening thought.

Can a Person in a Vegetative State Hear You?

The challenge for physicians and scientists, though, is determining if a patient is aware, despite being unable to communicate.

Sure, MRIs can “read” brain function and identify areas of brain damage, but consciousness is a behavioral thing, and detecting the pieces of perception and awareness within a vegetative state isn’t quite so simple.

To make matters worse, the clock is ticking, and the longer one stays in a vegetative state, the less likely it is that they’ll eventually wake up. For this reason, vegetative states longer than four weeks are considered continuing vegetative states, while at the six-month point they’re regarded as permanent.

Once someone has received a permanent vegetative state diagnosis, the chance of waking up is extremely unlikely, but still possible. But regardless of whether someone is in a permanent or continuing vegetative state, doctors don’t know whether the person inside is still in there, though there are treatments that some believe can lead to natural improvement.

Many of these therapies are primarily concerned with keeping the physical body in good working order in preparation for the mind waking up, such as using feeding tubes, cleaning the body and skin, and assisted movement.

Other, more stimulating treatments that are favored by family and friends include: playing music, introducing smells with flowers or fragrances, and physically touching or otherwise interacting with the patient. It’s all an attempt to engage the person inside and increase the chance of recovery, which stands roughly at a coin flip—a 50% chance for adults and a 60% chance for children.

Most people thought that, in principle, it would never be possible to know if awareness and recovery is right around the corner. But neuroscientist Adrian Owen, author of Into the Gray Zone, thought there might be a way to rout around damage to the nervous system, allowing patients to respond using only their thoughts.

Using fMRIs, neuroscientists discovered that there are distinct patterns in brain activity when healthy, conscious people think about doing different things — say, playing tennis vs. walking through their house. Owen put vegetative patients inside an fMRI and asked them to respond to yes or no questions by imagining one activity or the other. He found, amazingly, that around 20% of the patients he scanned were actually aware of their surroundings — and thanks to his technique, able to communicate for the first time.