In vitro gametogenesis would allow everyone from same-sex couples to those past menopause to conceive.
Watch on YouTube
Up Next
Now Playing
Robotic birth simulator saves lives in the delivery room
3:17 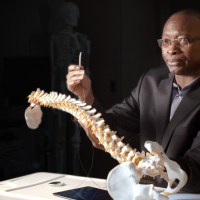 The “birds and the bees” as we know them are changing. A new process called in vitro gametogenesis (IVG) is currently being developed, and if successful, it will completely transform the way humans think about reproduction.

“In 20 to 40 years, people will still have sex. But when they want to make babies, they’ll go to a lab,” predicts Stanford University Professor Henry T. Greely. It’s also the premise of his book – The End of Sex and the Future of Human Reproduction.

The designer babies of the future are closer than we think. Here’s how the science behind in vitro gametogenesis is attempting to stretch the limits of human reproduction further than ever before.

IVG is not to be confused with in vitro fertilization (or IVF) – a process that’s been successfully aiding couples with fertility and conception since the 1970s. In vitro gametogenesis, is a new reproductive process that’s still being researched and developed.

The process of IVG creates sperm and egg cells in a lab from just about any adult cell. IVG uses skin or blood cells to reverse engineer a special type of cells called induced pluripotent stem cells (iPSCs). Essentially, iPSCs are adult cells that have been genetically reprogrammed into an embryonic state, meaning they have the potential to transform into any type of cell: kidney cells, muscle tissue, sperm, or eggs.

IPSCs can be used to create the necessary components for reproduction: eggs and sperm. They’re also at the forefront of all sorts of important research, including disease treatment, transplant science, and cutting-edge drug development.

In the hypothetical human IVG process, an individual would provide a skin biopsy. A lab would then reprogram those skin cells to create induced pluripotent stem cells, which would then be used to create eggs or sperm.

From there, the rest of the reproductive process would look similar to IVF. Embryos would be created in vitro, and the viable ones would be placed in a patient’s uterus for implantation.

How IVG Could Shape the Future of Humanity

Since the world’s first IVF baby was born in 1978, about eight million more babies have come into the world thanks to the procedure. As worried as people were about the implications of “test tube babies” at the start of IVF treatments, in vitro gametogenesis stands to push the limits even further.

Today, we still need a man and a woman to make a baby. Reproduction still requires testes to make sperm and ovaries to produce eggs. And although there’s technology to preserve eggs and sperm for the future, humans largely need to be within their reproductive years to have children.

But the reproductive possibilities with in vitro gametogenesis are pretty much limitless. IVG could eliminate the need for egg and sperm donors. With IVG, post-menopausal women could generate viable eggs. Same-sex couples could make a biological family. Virtually anyone with skin would have the ability to produce eggs or sperm.

Although IVG hasn’t been performed on a human yet, with advancing science, it’s likely not too far off. In 2016, a team of scientists at Tokyo University of Agriculture in Japan helped a female mouse successfully give birth to 26 pups, using eggs created from skin cells.

In 2018, Japanese scientists were able to generate immature human eggs, using induced pluripotent stem cells derived from human blood cells. These incomplete eggs would not be viable for fertilization, but they do represent a major step toward the development of a successful human IVG process.

Professor Greely estimates that researchers will need another five to ten years to reach a reliable proof of concept. After that, they’ll need at least one or two decades for safety testing. Although 40 years might seem a lifetime away, there’s a lot to figure out before we can safely, ethically, and responsibly add in vitro gametogenesis to our list of fertility treatment options.

The Ethical Implications of IVG

In the 70s, when IVF technology was new, people worried we were treading into unethical territory. And similarly, the likelihood of completing successful human reproduction through IVG is raising all sorts of ethical quandaries.

The differing opinions around designer babies and trait selection comes to mind. With IVG, a person could create an unlimited amount of embryos, until they created one with the traits they were hoping for.

While many tout the benefits of being able to erase certain health conditions, those currently living with these conditions feel further marginalized by humanity’s attempt to eradicate people like them from future generations. Paired with gene editing and CRISPR technology, which allows scientists to change DNA sequences, IVG raises questions about the ethics of prenatal eugenics.

In addition to these matters, there are likely implications we can’t yet fathom. Just like people in the 70s worried about the potential effect IVF could have on a baby’s development, we have no way of knowing the effect IVG could have on future generations.

In spite of all the potential good IVG could do for people struggling with reproduction, there’s no way to anticipate all of IVG’s potential risks. A slew of new legislation will need to be approved to keep pace with IVG reproductive technology and all of its implications.

Ethical implications aside, in vitro gametogenesis could be life-changing for the millions who need another avenue in order to create a biological family. For now, we can only watch and wait to see how IVG research and development unfolds, while we try to imagine how designer babies born from skin cells could shape our future.