In 2015, the Obama Administration created the Task Force on 21st Century Policing with the mission to strengthen trust between law enforcement and the communities they serve. This task force reignited public enthusiasm around the term “community policing.” While this term is currently a media buzzword used to describe any positive police engagement with the community, it’s not a new concept. Where does “community policing” come from and what does it actually mean? And, more importantly, is it effective?

The Ebb and Flow of Community Policing

Community policing in the U.S. has roots in early 19th century England, with Sir Robert Peel, the first Chief of Police of the London Metropolitan Police District. Peel, known as the “Father of Modern Policing”, outlined nine principles for effective policing. Among them is the need for police to have public approval, public cooperation, and public trust. Peel is credited with innovations that help foster public and police engagement such as regular foot patrol and consistent beats that enabled officers to build rapport with citizens over time. The key to preventing crime, according to Peel, is earning public support. The police can earn this support by respecting community principles and using force as a last resort. In turn, Peel advocated, community members will take on more responsibility for preventing crime in his or her neighborhood. High arrest statistics, according to Peel, doesn’t signify an effective police force but a community that has a low crime rate does.

In America, the desire to solve crimes by fostering greater cooperation between the police and community has been evolving since the 1960s when urban riots exposed the weakness of traditional law-and-order policing, a model that emphasizes strict hierarchical organization over relationships. In response, President Lynden Johnson passed two measures aimed at fostering better police-community relations: the 1967 President’s Commission on Law Enforcement and Administration of Justice and the 1968 Kerner Commission on Civil Disorder, also known as the National Advisory Commission on Civil Disorders. In particular, the Kerner Commission looked closely at how fear between police and citizens played a role in the violent 1967 riots that killed 43 people in Detroit, Michigan and 26 in Newark, New Jersey. As a result, the commission recommended forming the Office of Community Oriented Policing Services (COPS), a federal organization designed to support better communication between citizens and police.

The movement really got a boost in 1994 when President Bill Clinton committed billions of dollars to hire and train 100,000 community policing officers through the Violent Crime Control and Law Enforcement Act of 1994. However, community policing fell out of vogue shortly after.

“Some people have speculated that 9/11 knocked it out of (police priorities) because then the police departments focused on homeland security, thinking about prevention of terrorist attacks so that moved them away from community policing,” said Dr. Charlotte Gill, Assistant Professor in the Department of Criminology, Law and Society at George Mason University.

“But after Ferguson, it has re-emerged,” said Gill of community policing strategies. Police and communities have found it difficult, however, to bridge the relationship after a decade of mistrust.

“When you have a community that hasn’t had a good relationship with the police to start with, it’s very difficult for the police to go in and say, ‘hey we’re going to go in and do community policing’,” said Gill. “It has to be looked at how do you take this long-term approach to get back into the community and building up the trust. I think that’s when police and community can start working together on some of these other police tactics that we do know reduce crime. If you want community collaboration and partnership you have to put in the effort in first to build meaningful relationships and the community has to trust you first. That will take a long time.”

The U.S. Department of Justice’s COPS Office defines community policing as: “a philosophy that promotes organizational strategies that support the systematic use of partnerships and problem-solving techniques to proactively address the immediate conditions that give rise to public safety issues such as crime, social disorder, and fear of crime.”

“That definitely is difficult to implement in practice,” said Gill.

The vague definition has meant everything from a tactic to concept to philosophy. Community policing has been used in ways ranging from embedding police officers in the community to conduct foot beats and outdoor roll calls and in some cases, having police officers move in to the neighborhoods they patrol. “Our lack of definition around community policing still haunts us and confounds many earnest attempts to reduce crime and improve community satisfaction,” said James Burch, president of the National Police Foundation (NPF).

“(The COPS office) definition suits our views on community-oriented policing well as it relies on organizational strategies and the systematic use of partnerships and problem-solving techniques,’” said Burch. “However, we think it does fall a bit short in the sense that is seems to focus only on ‘addressing the immediate conditions’ that enable crime, disorder, and public fear.” Burch says community policing can address more than the immediate conditions; it can also address the root causes and longer-term conditions that bring about public safety concerns.

According to a 2014 systematic review on the topic that Gill co-authored, she and her colleagues identified a range of strategies employed under the auspices of COPS over the past few decades. Their review found that community policing strategies have positive effects on things like citizen satisfaction, perceptions of disorder and police legitimacy; however the effect on crime and fear of crime were limited.

Burch said defining community policing is essential because the vague definition in the past has allowed those implementing it to make it what they want it to be instead of what it needs to be. In the foundation’s view, the emphasis has been placed on encouraging officers, agencies and communities to work together, but it doesn’t provide specifics “other than giving the community a seat at the table and engagement generally.

“Not a bad thing,” said Burch, “Just not likely to actually impact crime.”

Another problem that Joel Shultz, a former police chief from Colorado said that a hyper-dependence on police to solve every problem, is itself a problem. “In general, the police shouldn’t be the end all and communities could consider “accepting the equal probability that somebody else at the table can resolve that problem without any additional police activity.”

“If a community asks why and police say ‘just trust me,’ then you have a parent-child relationship instead of a truly collaborative relationship,” he said. “It’s part of the problem that police training faces. We don’t train for the skills of collaboration that are essential to community policing.” Police officers, under community policing strategies, are expected to do more than keep law and order, they’re expected to be a social worker, psychologist, and arbitrator, among other roles. This distracts the police from their mission of crime fighting, say critics.

But Gill believes that community policing is a philosophy that doesn’t have to depend on crime rates. “There are a number of other issues and outcomes we should be thinking about too. Community policing does increase satisfaction with police. It increases people’s perception of the legitimacy of the police.”

And these are benefits that we cannot ignore.

“Given that citizens who trust and accept the authority of the police are more likely to obey the law, citizens’ perceptions of legitimacy and police effectiveness may be important antecedents to crime control,” the Gill and her colleagues write in the 2014 review.

If police departments can build positive relationships with the community “and then do effective crime control strategies (in addition to that), that strikes me as being the most promising way forward,” said Gill. 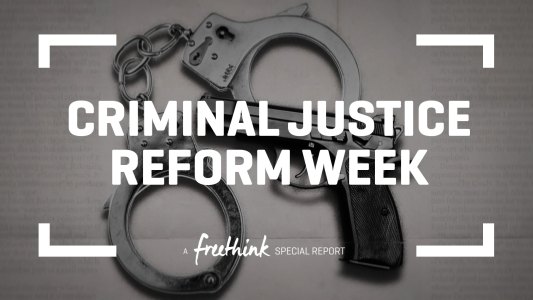 Join us as we go inside the criminal justice reform movement for an up close look at the people trying to fix our broken system.