Across the U.S., some prisons, jails, and detention centers are being converted from facilities that confine people into ones that support them.

U.S. inmates are currently being housed in more than 5,000 prisons and jails across the country, but even as new correctional facilities are being built, others are closing due to budget constraints, crumbling infrastructure, and a slowly declining inmate population.

Some of those former prisons and jails have been converted into condos, breweries, or luxury hotels. But others are on the path to becoming mental health clinics, community centers, and homes for former convicts — and the three highlighted below have already made the transition into places that serve their communities.

In 2001, North Carolina ordered the closure of the Scotland Correctional Center, a minimum custody prison built in Wagram in the 1930s.

Eight years later, Noran Sanford, a local mental health therapist, found himself at a funeral for a young patient who had died in a gang-related shooting.

That’s when an idea started percolating in his mind: What if he transformed the abandoned prison into something that could help other young people from succumbing to the same fate as his patient?

Soon after, Sanford convinced the N.C. Department of Public Safety to lease him the 67-acre property for free, and he launched the nonprofit organization Growing Change.

Growing Change is now working with youth in three counties to transform the former prison into a sustainable farm where the young people garden, keep bees, and tend to sheep.

They also regularly interact with the community outside the property’s walls, for example, by directly distributing the produce they grow to neighbors in need of food.

“What traditional therapy often doesn’t touch is…the community,” Sanford told Civil Eat. “There has to be some kind of social efficacy developed, that (community members) can have confidence that these young people can change. They have to make a place for them at the table.”

Just 21 years after opening, the Gainesville Correctional Institute, a medium-security state prison in Florida, closed in 2012 due to budget cuts.

Two years later, the facility reopened as Grace Marketplace, a shelter and service center for Gainesville’s homeless population — but not before undergoing some deliberate renovations.

“We tried to get rid of all the elements that reminded people it was a former prison as quickly as we could,” Executive Director Jon DeCarmine told the Marshall Project in 2015.

About 200 people now live at Grace Marketplace, which features a computer lab, closet of donated clothing, and cafe that serves food grown from the onsite garden.

Overall, the number of people living on the streets in Gainesville dropped by 36% between 2014 and 2019, and Grace Marketplace has reportedly helped more than 700 people secure housing — 80% of whom were still in the homes a year later.

Two years later, though, the facility was packed with teens — only these young people were there by choice to celebrate the grand opening of the LOFT Legacy Teen Center.

After $65,000 in renovations, what used to be a standard detention facility is now a place for high school-aged kids to hang out for free.

There are ping pong and pool tables, a music room with a keyboard and guitars, and even a green screen for teens who want to film their own videos.

There’s also a computer room with internet access and two “respite rooms” that can serve as an overnight safe haven if a kid is having trouble at home.

Employees of the county juvenile court system are onsite at all times to watch over the teens and offer guidance, which eliminates the need to pay dedicated facility staff.

In addition to saving the county money, the LOFT appears to be having a positive influence on its target demographic.

“Juvenile referrals in St. Johns…went from 41 referrals in the year before the teen center opened to 18 referrals,” Catalyst4Change, an award program that recognizes innovative community supervisors, wrote of the LOFT. “That is over a 55% reduction in juveniles and families that are entering the criminal justice system.” 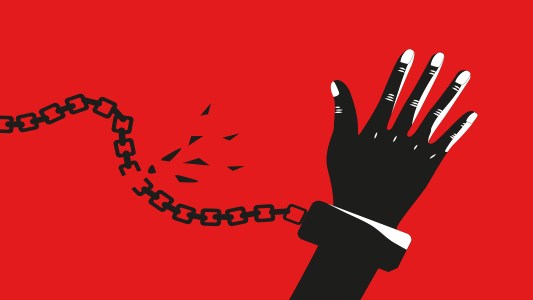 Across the U.S., companies and governments are starting to officially recognize Juneteenth, the June 19 holiday also known as Black Independence Day.

Fixing Justice
Why Juneteenth (June 19) could soon be a national holiday
Subscribe to Freethink for more great stories
Subscription Center
Challenges
Video
Freethink
Subscribe
We focus on solutions: the smartest people, the biggest ideas, and the most ground breaking technology shaping our future.
Subscribe