Cooks scatter around the kitchen in Bonton Market Cafe on a typical Wednesday morning. It’s only 9 a.m. but the orders are already pouring in — one biscuits and gravy, two French toasts, one sweet potato hash.

In the midst of the controlled chaos, Tasha Lee’s laughter rings out above the clink-clank-sizzle background noise as she prepares the orders. Tasha is the new line cook at the Bonton Market Cafe, a restaurant located on Bonton Farms, an urban farm in South Dallas.

“My grandmother always told me that a way to a person’s heart is through their stomach,” says Tasha. “So every time she cooked, she always made it with love and compassion.”

The apple didn’t fall far from the tree.

The farm’s mission is simple: to improve the health, emotional, and economic well-being of Bonton residents. Forty-eight percent of Bonton residents live in poverty — they also live in a food desert. Sixty-three percent of residents lack personal transportation and the nearest grocery store is a 3-hour round-trip bus ride away.  This lack of access to healthy food contributes to Bonton’s poor health statistics: the cardiovascular disease rate is 54% higher than the average in Dallas; the rate of diabetes is 45% higher; and the rate of cancer is 58% higher.

In many ways, Tasha was an embodiment of Bonton’s unhealthy lifestyle — and Bonton Farms was created to make a healthy lifestyle more accessible to residents like her. But to really make an impact, Daron Babcock, the founder of Bonton Farms, knows they can’t just grow food. To be a sustainable solution to healthy living, they have to grow a community that pursues well-being in all aspects of life: from the nutritional and financial to the social and spiritual.

Thanks to this holistic approach to well-being, Tasha is now on a healthier, more independent, and more financially stable path in life.

‘Hard to Get Away From That Routine’

When Tasha moved to Bonton from Los Angeles 20 years ago, Bonton had convenience stores, where residents could pop in and buy alcohol and processed snacks — but no place to purchase fresh produce or organic vegetables.

At the time, however, 28-year-old Tasha wasn’t focused on achieving a healthy lifestyle.

“I was smoking, I was drinking.”

“McDonald’s was my favorite place (for) fast food. And then I was working at Jack in the Box too. All negative,” recalls Tasha, “My vegetables would come from a can. My meat was, of course, processed.”

But in her late-30s, Tasha’s unhealthy lifestyle caught up with her. After the birth of her daughter, Rain, doctors gave her some unwelcome news: her liver and kidneys were failing as a result of type 2 diabetes.

“It was so bad that it started messing with my eyes.”

Her doctor was blunt. “Do you want to grow up to see your children have children?”

If so, she needed to make drastic lifestyle changes. Her liver and kidneys were similar to that of a 70 or 80-year-old.

“You can beat type 2 diabetes,” she recalls the nurse saying. “You have to change your eating habits. You have to get up and you have to move.”

She knew the doctors and nurses were right — but “it is hard to get away from that routine.”

Tasha’s lifestyle wasn’t always unhealthy. Growing up her grandmother made healthy eating a priority for the family.

“There was no such thing as ‘box’ in our house. No box. No can. Everything came from scratch. When we made biscuits, it wasn’t popping open a can of Pillsbury,” says Tasha. “I didn’t get sick as much as a kid because we lived off the land.”

Tasha loved home cooked meals so much that she had dreams of being a chef one day. “My passion has always been cooking.”

For young Tasha, however, creating meals in the kitchen wasn’t merely a fun way to pass the time. It was survival. Her mom had AIDS and struggled to afford the medicine the doctor prescribed. So,11-year-old Tasha began selling baked goods in her neighborhood and in the schoolyard.

“I made a cupcake called The Hunka Hunka,” says Tasha, in honor of Elvis Presley. The cupcake consisted of peanut butter, peanut butter cups, jelly, bacon, banana — all the things, according to Tasha, that the King of Rock n’ Roll loved. Her neighbors and classmates loved it too and the “Hunka Hunka” enabled her to contribute to her mother’s medical funds.

Then, at 14-years-old, her mother passed away — and well into adulthood, life for Tasha continued to be about survival.  Her dream of becoming a chef — and maintaining a healthy lifestyle — was put on the backburner.

Then came the diagnosis.

Over 30 million people  have diabetes in the U.S. Of those diagnosed, an estimated 7 million are hospitalized annually for diabetes related symptoms.

Tasha was one of those people. She was hospitalized for nerve pain which often affects the legs and feet of a diabetic. It’s characterized by sharp pain, a burning sensation, and sensitivity to touch (even the weight of a bedsheet can be painful).  Her hospitalizations — and adverse reactions to her prescription medicines — made it hard for her to work.

“I woke up long enough to use the bathroom. And lay back down.”

Tasha couldn’t work, so the responsibility of taking care of her daughter and financially providing for the family fell on her husband.

Then he lost his job.

And when they couldn’t pay rent, they lost their apartment.

The family moved into a friend’s house — and slept on the living room floor — while Tasha and her husband both tried to secure jobs. But Tasha was still sick, and when her husband  struggled to find work, he turned to drugs and gang activity to earn money. Tasha disapproved and they split up.

Suddenly, Tasha was a homeless, single mom sleeping on her friend’s floor with her young daughter.

They slept there for 4 years.

‘He Puts You Where You Need To Be’

In hindsight, Tasha says, she was right where she was supposed to be.

While driving her to a job interview this past July, her friend wanted to make a quick stop at Bonton Farms. Tasha had never been there before. She didn’t believe a farm could exist in Bonton. “Here? In the ‘hood? No way.”

But it was true: a farm really did exist “in the ‘hood.”

“She takes me down there, and I meet Daron. I meet the chef. I meet a couple of other people, and then all of a sudden one thing led to another,” says Tasha.

Bonton Farms — a place filled with fresh produce and organic food — wanted to hire her as a cook. A career path that she was passionate about, a community that would support her health goals, and a steady paycheck? Her prayers, she thought, had been answered. This is where she needed to be.

A New Apartment and a “Burst of Energy”

Tasha became a line cook at Bonton Market Cafe this past July, a step closer to a healthier life and to her dream of becoming a chef. However, she still didn’t have a permanent roof over her family’s head. The overwhelming financial stress of her daily life made it difficult to take advantage of the career opportunities Bonton was providing.

“If you don’t have a proper living situation, you’re just not going to focus,” says Tasha. “I was trying to make ends meet and trying to be a parent…I didn’t move fast. I’m going to be honest, I moved really slow. It was stress.”

Daron and the staff at Bonton Farms understand how insufficient housing can get in the way of opportunities. They’ve found that Bonton Farm employees are 82% more likely to stay employed if they don’t have to worry about stable housing. Without that burden, residents like Tasha are enabled to pursue long term goals both in their careers and personal lives — and healthy living is less likely to get relegated to the backburner.

So, Bonton Farms created a housing stability program for employees like Tasha — those who are hardworking but in need of extra help to keep a roof over their heads. They offer financial education about the risks of high-interest loans and provide a “rent-to-own” program for selected employees. As part of the rent-to-own program, Bonton Farms built several small apartments, allowing selected employees the ability to rent the apartment at an affordable price. Their rent goes toward the eventual down payment and purchasing of the apartment.

One month after Tasha began working at Bonton Farms, one of their apartments became available — and soon afterwards, Tasha was holding the keys to her future home.

She and Rain moved into the furnished apartment — complete with real beds — right before Rain’s birthday.

“She was so elated about having a place to stay that she didn’t even want a birthday party.”

The apartment for Tasha is about more than the possibility of home ownership: it’s about ownership over her own life. Stress and unhealthy habits don’t control her anymore.

“Now I have a burst of energy.”

‘Closer To Where I Want to Go’

Since being diagnosed with diabetes 7 years ago, Tasha has lost 72 pounds. She eats healthier and makes an effort to be active. This is something she wants for her daughter, too.

“My daughter is a dancer, she’s a track runner, she plays basketball, she’s an athlete. So I have to keep her with the right foods, you know?” says Tasha. “I have always wanted her to do better than what I have done. I always encourage her to not make my mistakes.”

These days getting the right foods doesn’t involve traveling miles to the nearest grocery store on the other side of town — “when I leave from work, I can leave from work with the squash and all the other food that is farm raised.”

And as for her dreams of becoming a chef, Tasha says her goal is to one day have her own establishment. She wants to have a place where she can teach people how to cook and she plans to attend culinary school in the spring.

Since becoming a part of the Bonton Farms family, Tasha says, “I am much closer to where I want to go.” 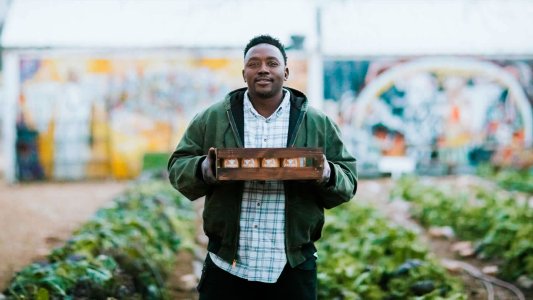 In the impoverished community of Bonton, it takes a three-hour bus ride just to reach the nearest grocery store. But the neighborhood is now home to one of the largest urban farms in the US – offering jobs, nutrition programs, and more.