A startup nonprofit is renovating abandoned houses in Baltimore and then selling them to locals at affordable prices — proving it’s possible to revitalize a neighborhood without driving out its original residents.

The challenge: One way real estate developers make money is by purchasing abandoned houses in low-income neighborhoods and turning them into housing for middle- and high-income residents.

This isn’t a problem in and of itself. The new housing can attract businesses, lower local crime rates, and increase property values — a boon for local homeowners.

However, it can sometimes lead to displacement of the neighborhood’s original residents and gentrification.

“We’re focused on ensuring that legacy residents can stay in their neighborhood as long as they want.”

Inclusive revitalization: Bree Jones had experienced gentrification firsthand while living in New York, and it inspired her to launch Parity, a different kind of real estate development company.

”[W]e’re not just focused on the construction of new housing, but we’re focused on ensuring that legacy residents are retained and can stay in their neighborhood as long as they want and participate in the revitalization,” she told Fast Company.

How it works: After looking at many potential locations through the U.S., Jones decided Baltimore’s Harlem Park neighborhood would be the ideal place for Parity’s first project.

Baltimore has thousands of vacant homes, and in the past few years, the city has spent $100 million in state funds on demolishing whole blocks of abandoned homes.

Rather than destroying older housing, Parity wants to revitalize the area by restoring and renovating 96 row houses in the neighborhood.

The abandoned houses are all in the same 10-block area, and Parity has already purchased 10 of them, with renovations expected to begin in October.

“We raise funds from philanthropy, city and state subsidy programs, donations,” Jones told WBAL TV. “We put all of that into the cost of the homes so we can lower the cost of construction so we can sell the houses at deeply affordable price points.”

If all goes well with the project, Jones hopes to replicate the model in other cities with large numbers of abandoned houses, such as Detroit.

Moving in: Parity is selling the Baltimore houses to locals with annual incomes between $40,000 and $60,000. The first residents are expected to move into their homes in early 2022, and 100 people are on Parity’s waiting list for future houses.

“Right now, it looks like a bunch of rubble, but I can envision how this would be a home in about a year,” Ako-Akeem Boyd, a software engineer who purchased a Parity home for less than $200,000, told WBAL TV. 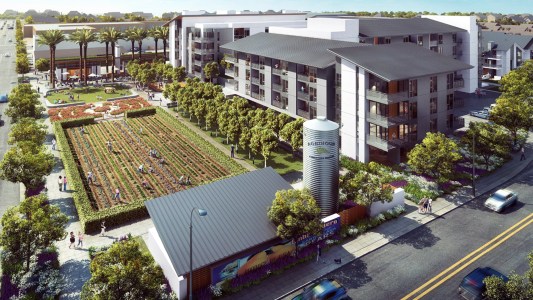 Urban Living
“Agrihood” puts a farm in the center of Silicon Valley housing
By Kristin Houser
Subscribe to Freethink for more great stories
Subscription Center
Sections
Video
Freethink
Subscribe
We focus on solutions: the smartest people, the biggest ideas, and the most ground breaking technology shaping our future.
Subscribe