Cierra hops on the bus and rides to the mall. With an iPhone in her pocket and camera slung over her shoulder, she is poised to conquer the world. She tries on a few outfits at clothing stores, snapping pictures of her favorites and sending them to her friends. She then heads over to Sephora to have her makeup done — an ordinary trip to the mall for many women.

But for Cierra, the expedition manifests a newfound autonomy. That is because Cierra got there all on her own — without the guidance of a caregiver. She did it using the Wayfinder app, which unlocks independent travel for people with intellectual disabilities.

“It is a really wonderful example of somebody realizing their independence and capabilities…and then being able to act on that,” says Shaleea Shields, the director of innovation at Merakey, the human services organization that works with Cierra. She introduced Cierra to the app.

Merakey is an education and services company that helps people with intellectual and developmental disabilities live a stable life. They have several group homes, staffed with caregivers, throughout the country. Shields works to integrate technology into Merakey’s supportive services. She’s helped launch several smart homes with integrated technology to support independent living for people with disabilities like autism or cerebral palsy.

But access to the open road takes personal freedom to the next level. That’s what Cierra found when she took WayFinder for a test drive.

The first 30 people at Merakey to test the app lived in group homes, staffed with 24-hour support to help the residents with day-to-day tasks. But getting to the mall, their job, or a friend’s house alone was a challenge. With WayFinder, they have an intuitive iPhone app guiding them every step of the way.

WayFinder was designed by AbleLink Technologies to give people with cognitive disabilities the opportunity to travel independently. The mastermind behind the app is Daniel Davies. As a “human factors” engineer, he studies how technologies work in practical situations — with real people (and all their imperfections) at the helm.

Davies’ early work was in aerospace engineering. But seeing the hurdles his brother faced as someone with an intellectual disability, Davies turned his skills toward the field of disability services. He launched AbleLink in 1997 to create technology that would help people with cognitive disabilities participate in life more independently.

One critical area is transportation.

The beauty of WayFinder is that it’s innocuous. It’s normalizing. Everybody has a smartphone.

“Mainstream technology is just a bit complex for many people with cognitive disabilities to use independently. That is true in the area of transportation as well,” Davies says.

Being able to drive to work or catch a bus is often the key to keeping a job. Many people with disabilities can’t get a license or afford a car, so they have to rely on the public transportation system, which Davies says is “not an easy system.”

Before WayFinder, a Merakey staffer chaperoned Cierra to the mall, appointments, and social events. Nearly all Merakey’s residents, and much of the greater community of people with cognitive disabilities, need this kind of support. Some people with cognitive disabilities call a paratransit program (required of the public transportation system since the Americans with Disabilities Act), but paratransit is much costlier than fixed-route buses because it needs to offer door-to-door services for people who cannot navigate the regular system.

“If you can help individuals move to using the fixed route system, there is tremendous cost savings to transit agencies for doing that,” Davies says. WayFinder does just that.

Marc J. Tassé, a psychologist at Ohio State University, studies intellectual disabilities and neurodevelopmental disorders, focusing on technology’s role in supporting independent living and general well-being. He says smart tech could help reduce the need for having a support person by their side.

Unlike Google Maps, the app anticipates common areas of confusion and steps in with additional help.

“It’s quite stigmatizing because you have a person with you — what everybody quickly recognizes as somebody teaching you,” Tassé says.

Although he doesn’t work with AbleLink, he became familiar with the WayFinder app through Columbus’s smart city initiative, where they tested WayFinder with the public transportation system.

“The beauty of WayFinder is that it’s innocuous. It’s normalizing. Everybody has a smartphone, and the person interacts with their smart phone — and it’s invisible,” he says.

Shields says that Cierra and the other participants in the Merakey program shared a sense of community while using WayFinder to get around town because they “felt that they were doing something everyone else got to do — they were a part of something bigger.”

The app uses GPS to prompt step by step instructions, guiding a person from point A to B. While developing the app, Davies spent time riding the bus with people with disabilities, learning what worked for them and what didn’t.

Unlike Google Maps, the app anticipates common areas of confusion and steps in with additional help. It uses pictures, audio, and text to let the rider know what bus to look for, when to exit the bus, and when to keep riding even if the bus stops. Typically caregivers or support professionals, like Shields, load the app with pictures and prompts for each route.

Some people with cognitive disabilities might be inclined to exit the bus when they see others doing so — even if it isn’t their stop yet. But caregivers can program the app to remind them that if they see people exiting at a certain location, they should stay on the bus. The app can prompt the user to pull the cord or alert the bus driver when their stop is coming up.

There’s also built-in safeguards that can offer a caregiver peace of mind. They can follow the rider’s position remotely and call them if they see they took a wrong turn. And, if that happens, the app will prompt the rider to call or text their caregiver.

“We all aspire to be as independent as possible because really that’s what our society values and expects. And if technology can help that, that’s fantastic. It also reduces the burden on taxpayers to support people with disabilities to live independently, because a lot of technologies are more affordable and reduce the reliance on paid personnel and paid staff,” Tassé says.

Helping people get to critical appointments and events may be the primary outcome of the WayFinder app, but it also builds confidence and fosters a sense of independence — a result that Davies and Shields both agree is the most important.

“When you think about all of the aspects of a person’s life and the barriers for people with intellectual and developmental disabilities — this addresses something that nothing else does. It changes what you’re able to do for yourself. It changes your confidence. And it also goes so far as making you a viable part of the workforce,” Shields says. “To be able to be out in the community independently changes your life.”

For Cierra, it meant exploring a love of photography. With the WayFinder app, Cierra can finally get around town all on her own.

“She is now somebody that can utilize public transportation when she couldn’t before,” says Shields, adding that the app was “life-changing for Cierra… because she had discovered a new level of independence.”

Cierra began taking photos with the iPhone and discovered that she had a talent for photography. She eventually got a camera of her own. Now she sells her pictures online. While WayFinder helps people get from point A to B, the independence and confidence it fosters can help people find their passions, too. 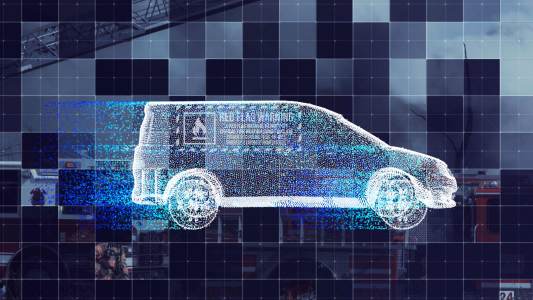 What if parked cars didn’t just take up space? Ford is designing the future of cars, starting with the purpose they serve when nobody’s driving.