The Sacramento Police Department (SPD) is using virtual reality simulations of high-profile police killings of Black Americans as part of its police training program, in the hopes that future officers will make better decisions that could save lives.

The need: The killing of George Floyd — an unarmed Black man — by white police officers in Minnesota in 2020 prompted a massive wave of protests across the U.S., with participants decrying police misconduct and demanding reform.

As part of this reform, many called for improved police training.

“The training we’ve had hasn’t changed in 25 years, and it’s out of step with today’s needs,” Chuck Wexler, executive director of the Police Executive Research Forum, told CNN. “We need to rethink and reimagine how we train.”

The challenge: Training officers to attempt to de-escalate high-stress situations before resorting to deadly force could help prevent unnecessary killings in the future, and one of the most effective ways to impart this police training may be to reenact real-world scenarios.

“The closer we get to the real world, the better the training is,” SPD Lieutenant Zach Bales told CNN.

But these reenactments usually involved trainees either performing a scene with actors or watching it play out on a television screen, and those approaches might not feel entirely “real” to an officer in training.

The VR solution: With VR, the SPD is able to train officers for difficult encounters in a way that’s more accurate and immersive than other reenactments.

“It can trick the brain very quickly into putting you physiologically in that environment and helping with that stress inoculation that officers need in order to make good decisions in high-stress situations,” Bales said.

“They’re able to see all of the options available to them instead of being narrowly focused on an individual threat or an individual problem.”

VR simulations can be made quickly — Bales said the department can have one ready for police training the day after a controversial shooting takes place — and they involve fewer logistical hurdles than real-world reenactments, too, since departments don’t have to find actors or secure a location.

We’re able to change dialogue, the environment, the type of call…

A growing trend: The SPD isn’t the first or only department using VR in the hopes of training officers to use force only when necessary — the use of VR in police training is a growing trend, with a number of companies designing and selling simulators to departments across the nation.

Nevada’s Apex Officer offers a system that utilizes AI and randomization to ensure recruits are constantly presented with unique training scenarios. Another company, SURVIVR, meanwhile, bases many of its scenarios on real incidents submitted by its customers.

Training officers can talk with recruits after they go through the simulations, discussing what they might have done right or should handle differently in the future. They can also make tweaks to scenarios, ensuring they perfectly fit the training curriculum.

The big picture: Because the use of VR for police de-escalation training  is relatively new, it’s hard to say exactly how big of an impact it will have on avoidable police killings in the U.S.

However, when CBS affiliate WUSA9 asked Barnstable Police Department (BPD) Sergeant Kevin Connolly whether he thought the department’s use of VR for police training might reduce the number of excessive force deaths, he was optimistic.

“All you can hope for is the more you go through scenarios and see different outcomes, it will help you make a decision in the field,” Connolly said. “Because if you’ve seen that scenario before, as long as it’s similar, it should help.” 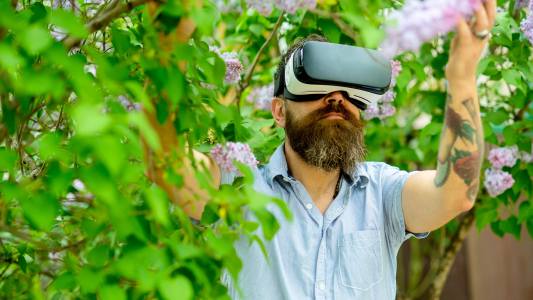 Researchers in Japan have developed a system that makes your brain think you’re walking — even when you’re sitting still.