Harvard astrophysicist Avi Loeb is leading a new project that will apply proven scientific methods to the hunt for alien technology, bringing the fringe field closer to the mainstream.

“Given the recently discovered abundance of habitable-zone exoplanets, with potential for extraterrestrial life, the Galileo Project is dedicated to the proposition that humans can no longer ignore the possible existence of [extraterrestrial technological civilizations],” Loeb said in a statement.

Anyone out there? Humans have been speculating about life beyond Earth for millenia, and some people even claim to have seen or communicated with extraterrestrials. However, we still lack any concrete proof of alien life or alien technology.

“Right now, we don’t have the evidence, and when we do have the evidence it’s quite contentious,” Mick West, a skeptical investigator who isn’t involved in the Galileo Project, told Scientific American. “I would prefer things to be less ambiguous.”

Why it matters: It’s hard to overstate what finding proof of alien technology would mean for humanity — not only would it confirm that extraterrestrial life exists, but also that that life is intelligent.

This would change our entire understanding of the universe and our place in it.

The researchers compare the potential impact of such a discovery to Italian astronomer Galileo Galilei’s use of telescopes to study the cosmos, which is why they’ve chosen to name their project after him.

ISO alien technology: The Galileo Project isn’t going to study any existing “evidence” of alien technology collected by the public or governments. Instead, its researchers will attempt to collect their own images of unidentified aerial phenomena and analyze those.

They also plan to look for satellites extraterrestrials might be using to observe Earth and to study interstellar visitors to our solar system, ones similar to the comet ‘Oumuamua, which Loeb previously suggested could be an alien probe.

“Science should not reject potential extraterrestrial explanations because of social stigma or cultural preferences that are not conducive to the scientific method of unbiased, empirical inquiry,” Loeb said.

Looking ahead: The Galileo Project has raised $1.755 million in donations that it will use to purchase telescopes to set up around the world. It’s also going to develop AIs to help sift through the images those telescopes record.

West, according to SciAm, supports more rigorous scientific investigation on the question but says only time will tell if Loeb’s project is visionary or eccentric.

Even if the project doesn’t yield concrete evidence of alien technology, the work the researchers do might improve our understanding of interstellar space or yield unexpected astronomical discoveries — and those have the potential to be world-changing, too. 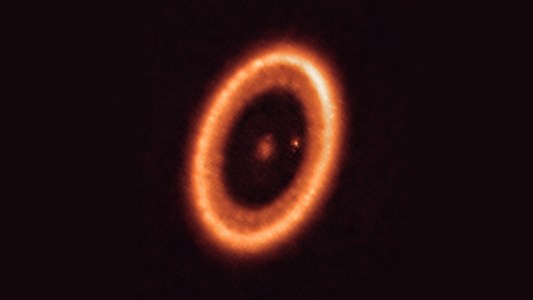 A unique baby exoplanet surrounded by a disc of gas and dust could unravel some of the mystery surrounding planet and moon formation.

Astronomy
Baby exoplanet appears to be forming a moon
By Kristin Houser
Subscribe to Freethink for more great stories
Subscription Center
Sections
Video
Freethink
Subscribe
We focus on solutions: the smartest people, the biggest ideas, and the most ground breaking technology shaping our future.
Subscribe