NASA is planning a mission to send a probe deeper into interstellar space than any craft before it — giving scientists an unprecedented look at our solar system and what lies beyond it.

What is interstellar space: Our sun has a massive circle of influence, with a solar wind carrying plasma particles 11 billion miles away.

The area inside this circle is known as the heliosphere, and interstellar space begins where it ends — it’s the area beyond the reach of the sun or any other star.

The challenge: In 2012, Voyager 1 became the first craft to reach interstellar space, followed by Voyager 2 in 2018. The trip took them more than 35 years, and their instruments (from the 1970s and not designed for this) were only able to provide scientists with limited data.

Both Voyagers are still transmitting data, but that is likely to end in the next decade — and there’s a lot scientists still want to know that a new mission to interstellar space could tell them, from how the heliosphere evolved to how the sun interacts with other objects in the Milky Way.

The Interstellar Probe: For the past three years, Provornikova has been leading a study to design a new interstellar space mission for NASA, working with hundreds of scientists and engineers across the globe on a craft currently called the “Interstellar Probe.”

In late-April, she presented the group’s findings so far at the annual European Geosciences Union General Assembly, and the plan is to present a finished report to NASA by the end of 2021.

The Interstellar Probe will go where humanity has never reached before.

“Our approach is to lay out the menu of what can be done in such a space mission,” Elena Provornikova said.

The cold water: NASA funded the study, but has yet to fully commit to launching the Interstellar Probe — that decision likely won’t be made until after the delivery of the finished report.

If approved, though, the probe could launch in the early 2030s and then reach interstellar space 15 years later.

Because it’d be traveling faster than the Voyager spacecrafts, it could transmit data back to Earth from nearly 10 times farther away than either of those probes during the course of its 50-years-long mission.

“The Interstellar Probe will go to the unknown local interstellar space, where humanity has never reached before,” Provornikova said. “For the first time, we will take a picture of our vast heliosphere from the outside to see what our solar system home looks like.”

Outer Space
Startup will send prized artifacts to the International Space Station
Uplift Aerospace will transport valuable goods to the ISS and house them in their Constellation Vault starting this year. 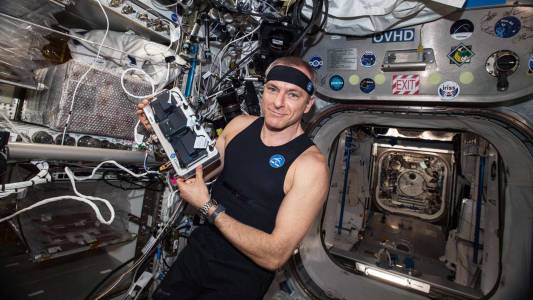 A sensor-packed smart shirt has been used to monitor astronauts’ health in space, with promising results.