Astronomers have observed a collision between a black hole and a neutron star for the first time — and then 10 days later, they spotted another one.

Two paths: Black holes and neutron stars are two of the densest, most extreme objects in the universe, and they both start out the same way: as massive stars.

When those stars run out of fuel, they expand into red supergiants that then explode as supernovae. After that, the stars either shrink into neutron stars or collapse and become black holes — the path they take depends on their original mass.

In 2015, scientists at the Laser Interferometer Gravitational-Wave Observatory (LIGO) proved Einstein right and wrong by recording the gravitational waves caused by two black holes merging — an achievement that earned them the Nobel Prize in Physics.

Since then, scientists have detected gravitational waves caused by more black holes mergers and mergers between pairs of neutron stars, but never between a black hole and a neutron star — until now.

What’s new? Using data collected by LIGO and the Virgo interferometer in Italy, scientists have now discovered evidence of two such collisions.

Unfair fight: Astronomers couldn’t detect any light from the collisions, which suggests that the black holes swallowed their respective neutron stars whole.

“These were not events where the black holes munched on the neutron stars like the Cookie Monster and flung bits and pieces about,” Patrick Brady, a spokesperson of the LIGO Scientific Collaboration, said in a press release.

“That ‘flinging about’ is what would produce light,” he continued, “and we don’t think that happened in these cases.”

Why it matters: The universe is rife with binary star systems in which two stars orbit the same point in space. It makes sense, then, that some of those pairs would die and become one black hole and one neutron star, but astronomers had never spotted such a pairing.

Now that they’ve detected these two collisions, they know that the events are rare but possible.

“It’s an awesome milestone for the nascent field of gravitational-wave astronomy,” study co-leader Rory Smith from Monash University said in a press release.

“Neutron stars merging with black holes are amongst the most extreme phenomena in the universe,” he continued. “Observing these collisions opens up new avenues to learn about fundamental physics, as well as how stars are born, live, and die.” 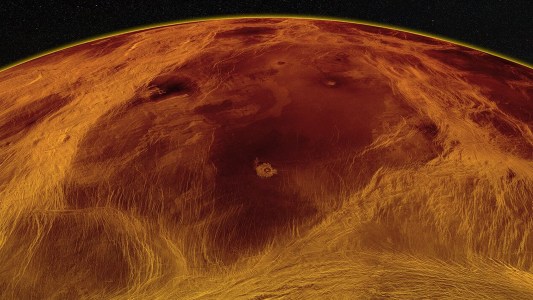 New evidence of tectonic activity on Venus expands our understanding of the hellish planet and offers a window into Earth’s own geological past.

Astronomy
Chunks of Venus’ crust float like icebergs on its mantle
Subscribe to Freethink for more great stories
Subscription Center
Challenges
Video
Freethink
Subscribe
We focus on solutions: the smartest people, the biggest ideas, and the most ground breaking technology shaping our future.
Subscribe