The dwarf planet Ceres — the largest asteroid in the solar system — may harbor a briny sea beneath its surface.

Intimate images shot by NASA’s space probe Dawn — some from as close as 22 miles away — have revealed the presence of a mineral that is formed only in salty water, leading scientists to believe the planet has a large underground reservoir.

If that’s the case, this could have huge implications in our search for habitable exoplanets. A group of studies published on Monday reveal that the salty deposits are only a couple million years old  — practically swaddling age for geologic features — and that the minerals still have faint traces of water in them. This could mean that geological activity is still occurring — which would make the dwarf planet Ceres an active world.

“We can now say that Ceres is a sort of ocean world, as are some of Saturn’s and Jupiter’s moons,” Maria Cristina De Sanctis, a planetary scientist at Rome’s Istituto Nazionale di Astrofisica and author on the Nature Astronomy paper, told AFP.

From hydrothermal vent dwellers to deep-sea microbes, we know that life is shockingly good at, uh, finding a way, and the dwarf planet Ceres’ chthonian sea is gravid with potential that it once harbored life — or perhaps still does. (A fitting tribute to its namesake, the Roman goddess of fertility, among other things.)

“The material found on Ceres is extremely important in terms of astrobiology,” De Sanctis said. “We know that these minerals are all essential for the emergence of life.” 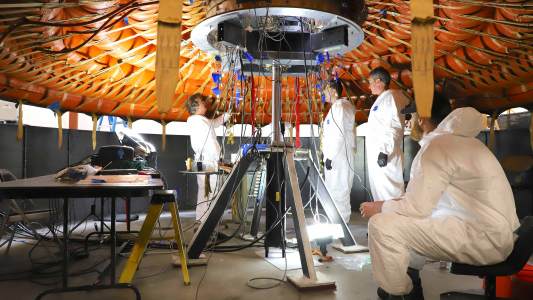 Mars is going to be bombarded with visitors from planet Earth — the U.S., China, and UAE are all launching unmanned spacecraft to the red planet this month.

Outer Space
Preparing for the first human mission to Mars
By Amanda Winkler
Subscribe to Freethink for more great stories
Subscription Center
Sections
Video
Freethink
Subscribe
We focus on solutions: the smartest people, the biggest ideas, and the most ground breaking technology shaping our future.
Subscribe