The atmosphere a planet is “born” with doesn’t have to be its last — Earth is on its third version of an atmosphere.

The first was likely made of the same gases as the sun, but those eventually escaped the planet’s gravity and were replaced by an atmosphere made of steam, carbon dioxide, and ammonia — the gases emitted by the young planet’s volcanos.

Now, for the first time, scientists have discovered that the formation of multiple atmospheres isn’t limited to planets in our solar system — an exoplanet can form a second atmosphere, too.

Observations from the Hubble Space Telescope have led to the discovery that a distant exoplanet, GJ 1132 b, is currently forming a second atmosphere.

GJ 1132 b was initially a gaseous planet with an atmosphere made of hydrogen and helium. Those gasses were stripped away by the radiation of the planet’s star, leaving behind a rocky core about the size of Earth.

“We first thought that these highly radiated planets would be pretty boring because we believed that they lost their atmospheres,” researcher Raissa Estrela from NASA’s Jet Propulsion Laboratory (JPL) said in a press release.

“But we looked at existing observations of this planet with Hubble and realised that there is an atmosphere there.”

The researchers suspect that the molten magma within GJ 1132 b absorbed some of the hydrogen from its primary atmosphere.

Volcanic activity is now releasing that gas through cracks in the exoplanet’s surface, forming the second atmosphere detected by Hubble.

“This second atmosphere comes from the surface and interior of the planet, and so it is a window onto the geology of another world,” researcher Paul Rimmer from the University of Cambridge said.

“A lot more work needs to be done to properly look through it, but the discovery of this window is of great importance.”

First of Its Kind Exoplanet

If the atmosphere is thin like they suspect, the telescope should be able to see the exoplanet’s surface at infrared wavelengths.

This second atmosphere is a window onto the geology of another world.

“(I)f there are magma pools or volcanism going on, those areas will be hotter,” JPL researcher Mark Swain said. “That will generate more emission, and so they’ll potentially be looking at the actual geological activity, which is exciting!”

The fact that GJ 1132 b appeared to transition from being a gaseous planet to a terrestrial one is also exciting, as it suggests that other exoplanets may have similar histories that are worth exploring.

“How many terrestrial planets don’t begin as terrestrials?” Swain asked. 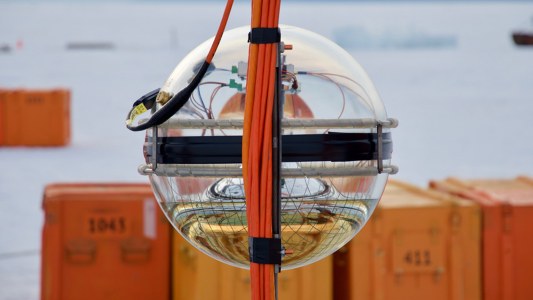 The world’s second-largest neutrino detector is now observing “ghost particles” from below the ice of Siberia’s Lake Baikal.

Astronomy
New underwater telescope could explain birth of the universe
By Kristin Houser
Subscribe to Freethink for more great stories
Subscription Center
Sections
Video
Freethink
Subscribe
We focus on solutions: the smartest people, the biggest ideas, and the most ground breaking technology shaping our future.
Subscribe