An innovative aquaculturist says that one day we could be farming fish on the moon. Imagine dining on a seabass dinner while enjoying the view of planet Earth, 238,900 miles away. (If this sounds weird, consider that scientists have already 3D printed chicken nuggets in space).

With Lunar Hatch, a project by aquaculture researcher Cyrille Przybyla at the French Research Institute for Exploitation of the Sea, we may one day be able to farm fish on the lunar surface.

The moonshot: Figuring out how humankind will feed itself on Mars or the moon will be an essential part of the mission, given that the European Space Agency wants to establish a “moon village” by 2030.

Conditions on the moon are harsh, but self-sufficiency is important, given how difficult it is to shuttle supplies from the Earth’s surface. Przybyl’s suggestion:  why not grow and harvest fish on the moon, with fish eggs from Earth and water from lunar soil? He wants to give moonbase residents a taste of comfort food. Freeze-dried fare won’t cut it.

Instead, he is searching for the most robust fish eggs to launch into space on a nanosatellite — eggs that could ultimately seed a lunar aquaculture.

Przybyla isn’t a space scientist. But he might be the best one to make this happen. If he can fine-tune sustainable aquaculture on Earth, why not on the moon, too?

“I proposed the idea to send eggs, not fish, because eggs and embryos are very strong,” Przybyla told Hakai.

Then he needed to see if the fish eggs could survive a spaceflight intact, so Przybyla loaded them onto an orbital shaker to simulate rocket launch conditions. After that, he tried a second device that had more intense shaking.

For dessert: Having fresh fish on the menu would be a significant boon for Earthlings living on the moon. It would boost the nutritional value of their diet, and adding variety to the menu could provide some joy and mental relief.

Przybyla also thinks that the presence of living animals will provide emotional support, as well.

“Rearing fish is likely to have a positive impact on the astronauts, as it gives them a connection to life on Earth, as well as a food source,” he told The Fish Site. “The space psychologists are lucky as they will have an interesting new field of research.”

The next steps: This won’t be the first time fish eggs are sent to space. The Fish Site reports a few previous experiments have been done with orbiting space labs and once at the International Space Station. But to have a full-blown aquaculture is a different story.

To make it work, Przybyla also needs to study how the fish eggs will fare with the cosmic radiation they’ll experience during spaceflight. Then, he will have other problems — fluctuating temperatures, microgravity, and a range of salinity, to name a few. But if we can make conditions up there suitable for man, surely we can do the same for fish. 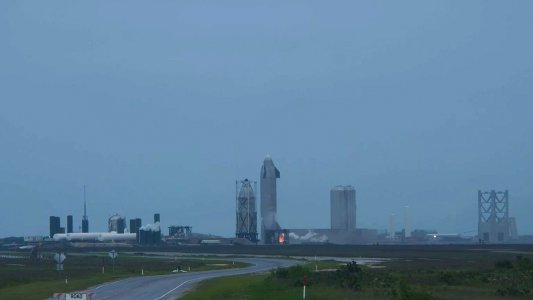 SpaceX’s fifth high-altitude flight test of a Starship prototype ended with a successful landing — a first for the massive Mars-bound rocket.