Most asteroids are made of rock, but more than 150 years ago, an Italian astronomer discovered Psyche, an asteroid made of metal — and next summer, NASA is sending a spacecraft to study it.

The Psyche asteroid is about 300 million miles from Earth, orbiting the sun from between Mars and Jupiter. It’s shaped like a potato, with an average diameter of about 140 miles.

NASA suspects that Psyche is the exposed nickel-iron core of an early planet. If that’s the case, we could potentially learn about Earth’s own core and the formation of terrestrial planets like ours by studying the asteroid.

That alone makes the mission an exciting one.

Adding to the hype is the fact that the Psyche spacecraft will be the first to enter deep space powered by Hall thruster technology — and if the propulsion system can prove itself on this mission, it could open up a world of cheaper deep space exploration.

Most spacecraft expel gas out their back ends to create thrust, which pushes them forward. You can think of this like a balloon filled with air — release the nozzle, the air escapes, and the balloon goes flying in the opposite direction.

Chemical rockets produce this exhaust gas by burning fuel. That creates a lot of thrust, which is useful when the rocket is lifting off and needs a lot of power to escape Earth’s gravity.

However, chemical fuel is extremely heavy, and getting more of it up there requires even more fuel to lift that out of Earth’s gravity. Costs can spiral pretty quickly.

Chemical thrusters aren’t the only propulsion option, though — there are also electric propulsion systems, and one of the most efficient of those is called an ion thruster.

An ion thruster uses electricity (usually from solar panels) to remove electrons from the atoms of a neutral gas. That creates ions, which can be directed using magnetic or electric fields. The thruster can then use those fields to accelerate the ions out the back of the spacecraft to generate thrust.

Ion thrusters aren’t nearly as powerful as chemical thrusters. Most produce just 0.5 newtons of thrust: if you imagine the weight of a quarter pushing down on your palm, you’ll get an idea how little that is.

However, that’s enough thrust to affect a spacecraft’s trajectory, and because ion thrusters are far more fuel efficient than chemical ones, they’re regularly used to correct the positions of communications satellites in Earth’s orbit.

A Hall thruster is a more efficient, more powerful type of ion thruster — in the lab, they’ve produced up to 5.4 newtons of force — partly thanks to a simpler design that allows the creation and acceleration of the ions to take place in one location.

In 2003, the ESA even sent a spacecraft with Hall thrusters to orbit the moon, but the upcoming Psyche asteroid mission will be the first to test Hall thruster technology in deep space.

“It’s always a big deal when you go beyond Earth orbit,” Robert Curbeam, a senior VP at Maxar Technologies, which created Psyche’s propulsion system, said in a NASA press release.

“As you get further from the sun, you’re going to generate less power from the solar arrays,” he continued. “The radiation environment is going to be different, and there’s the question of whether we can keep these thrusters pulsing for that long.”

The Psyche mission is expected to launch in August 2022, with the craft reaching its destination in 2026. It’ll then spend about 21 months orbiting the Psyche asteroid, collecting data on its properties.

If the Hall thruster can prove itself on that mission, others could follow — potentially giving astronomers a cheaper way to get up close and personal with objects in deep space. 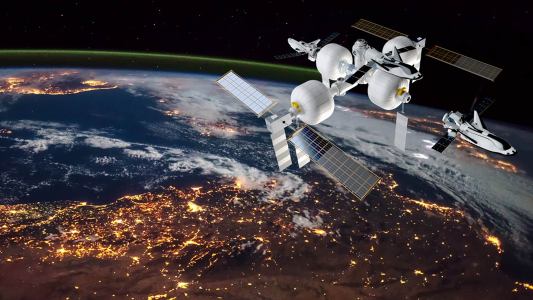 NASA is considering an inflatable space habitat designed by Sierra Nevada Corporation as a potential space station of the future.

Aerospace
Will the next space station be made of fabric?
Subscribe to Freethink for more great stories
Subscription Center
Challenges
Video
Freethink
Subscribe
We focus on solutions: the smartest people, the biggest ideas, and the most ground breaking technology shaping our future.
Subscribe