In the summer of 2005, U.S. Astronaut Stephen Robinson had to fix the Shuttle Discovery in orbit if he and his crew wanted to make it back to Earth alive. Some tufts of material were sticking out between the Shuttle’s heat panels. If Robinson didn’t remove the material, the shuttle might burn up on reentry. If he damaged the panels, it almost certainly would.

But there was another problem: Robinson didn’t have tools designed for the task, and he hadn’t practiced the procedure. Essentially, he’d be making a repair by the seat of his pants in outer space.

With guidance from NASA’s people on Earth, Robinson fashioned some tools, including a hacksaw made with tape. Then they came up with a game plan: He would attach himself to an arm of the International Space Station, and another crew member would maneuver him beneath the Shuttle Discovery, where he would delicately remove the material.

“(W)hat Robinson did–repurpose random tools and then troubleshoot a problem he’d never been trained to fix–is now the norm for life in space.”

We don’t often talk about what happened next, but that’s only because the plan worked. Robinson completed his task without damaging the heat tiles, and the Discovery crew made it home safe and sound. But we should talk about it, because it’s kind of insane that what Robinson did–repurpose random tools and then troubleshoot a problem he’d never been trained to fix–is now the norm for life in space.

But it didn’t used to be.

Before humans could do extended stays in outer space, missions left little to the imagination. “During the space shuttle era, astronauts used to rehearse every single aspect of the mission before they left Earth,” says Alex Kanelakos, a flight controller and astronaut instructor for NASA. “Astronauts would train a specific spacewalk six to nine times before they ever flew. But in the international space station timeframe, we don’t know what a crew member will have to do. There could be hundreds of tasks they might have to do.”

But crew members have learned to be mechanics, and there’s no better example of this than the extravehicular activity suit (EVA), what astronauts wear when doing external repairs to a satellite or spacecraft.

“The EMU (a type of EVA) is the oldest human spacecraft the U.S. operates today,” says Kanelakos. “The original suit design concept was that it would be in space for a couple weeks, then come home and be refurbished on the ground. But we’ve been able to make small design modifications that allow it to stay on the space station for six years. That’s not what it was designed for, but working with crew members, we’ve been able to do it.”

Seat-of-the-pants space repairs aren’t a new phenomenon. Way back in 1970, the crew of Apollo 13 worked with ground control to troubleshoot repairs after an oxygen tank exploded. The difference between then and now is that with a semi-permanent structure like the ISS–which has been in orbit since 1998–crew members and ground control staff know things are going to break. They just don’t know what things, or when.

“Crew members have to be smart enough to repair anything. Whether it’s a space suit, or a computer in a space module.”

“Crew members have to be smart enough to repair anything. Whether it’s a space suit, or a computer in a space module. They have to be electrical technicians, they have to be mechanical technicians,” Kanelakos says. “We write really good procedures, but we also look over their shoulders and guide them.” Even then, coming up with “hacks” is pretty common.

The process begins with a three-hour pre-brief in which crew members who will be performing the repairs go over the game plan in minute detail with experts on Earth. Then they head outside the space station for up to six hours of repair. But even with a clear game plan, they have to remember that they’re working in zero gravity, where a torque gun can turn the astronaut before it turns a bolt.

Things can be just as tricky inside the ISS, where a loose shim or a stray glob of grease can “wreak havoc” on sensitive equipment. Dropping a small part in hopes of finding it later isn’t an option: if it gets sucked into a filter (like on an EVA), people could die.

So if the number of repairs is potentially unlimited, and everything needs to be fixed in space, how do crew members prepare for the all the possible problems? “We train them on generic skills,” says Kanelakos. “If you know how to change a pump in space, you can install anything else with a similar interface.”

Related: Could many of these problems be avoided if astronauts were able to get tools on demand? 3D printing could hold the answer. Watch the video below for more… 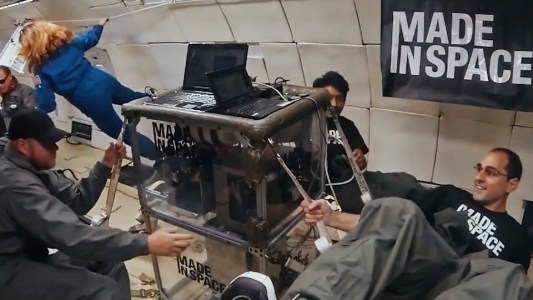 Sending things into space is really expensive. But what if we didn’t have to? What if everything in space was made…

3D Printing
Why this startup believes 3D printing in space will be a game changer
By Mike Riggs
Subscribe to Freethink for more great stories
Subscription Center
Sections
Video
Freethink
Subscribe
We focus on solutions: the smartest people, the biggest ideas, and the most ground breaking technology shaping our future.
Subscribe