When an audience member asked Elon Musk what he could do to prepare for an eventual trip to Mars, Musk answered the man’s question with another question: “Are you prepared to die? If that’s okay, then you’re a candidate for going.”

We’re experiencing a level of space enthusiasm we haven’t seen since the Apollo era. But we also know way more now than we did then about what space travel does to the human body. Some of it’s strange, some of it’s awful, some of it is just speculation. So if the idea of going to Mars fills you with glee, here’s what you should know about what happens to the human body in space.

Research published earlier this year suggests that the unusually high rate of heart disease experienced by the 24 astronauts who traveled to the moon as part of the Apollo program was the result of cosmic radiation, which drastically increases as we travel away from the Earth’s protective magnetosphere, ozone layer, and atmosphere.

The sample size is small, probably too small to say for sure that going into deep space (the moon, Mars) is significantly more harmful than extended periods in Low-Earth Orbit (the International Space Station, Space Shuttle flights). But the study’s authors suspect that the difference between lunar astronauts and other astronauts is too significant to rule out the effect of cosmic radiation.

Then again: Of the 12 astronauts who walked on the moon, seven are still alive. An additional 12 astronauts orbited the moon without going to the surface, and nine of those guys are still alive. Which means that of the 24 human beings who have traveled the deepest into space–where there’s no protection from cosmic radiation–16 have lived well into their 80s.

The amount of cosmic radiation travelers would endure on a two-year-long trip to Mars would be 300 times what an average person would be exposed to during a year on Earth.

While I have no idea how Buzz Aldrin’s ticker is doing today, I do know that at age 72, his heart was strong enough for him to slug a moon-landing conspiracy theorist after the guy got in his face.

Being exposed to space won’t cook you alive, but it will suck all the air out of your body

Every good space movie and sci fi novel features a character dying in space. But what really happens to an unprotected human body isn’t quite as morbid as you might think. Basically, you just suffocate, as Hank from SciShow explains here:

**Traveling to space makes you taller, but shrinks your heart **

If the Earth’s gravitational pull compresses our spines and forces our heart to pull blood away from our lower extremities, it stands to reason that removing gravity would elongate our spines and reduce the heart’s workload. It can also change your vision and weaken your bones, as astronaut Leland Melvin explains here:

But coming back to Earth still hits them like a wall of bricks. When astronaut Chris Hadfield returned to Earth after five months aboard the ISS, he had to relearn how to talk. “Right after I landed, I could feel the weight of my lips and tongue and I had to change how I was talking,” Hadfield said at a press conference in 2013. “I hadn’t realized that I learned to talk with a weightless tongue.”

Related: We could be grappling with these questions sooner than many think. Some even envision a near future where humans are taking flights to space everyday. Watch the video below for more:

*Home and feature image from NASA* 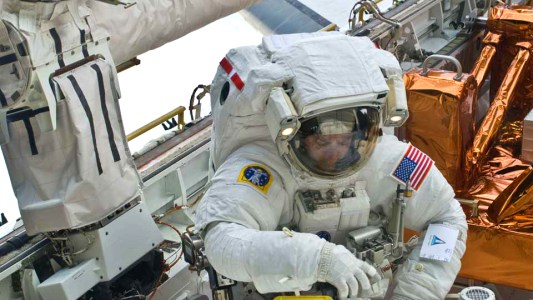 Despite rigorous prep, astronauts often have to improvise when things go wrong in space. And a lot more duct tape…

Outer Space
What happens when stuff breaks in space?
By Mike Riggs
Subscribe to Freethink for more great stories
Subscription Center
Sections
Video
Freethink
Subscribe
We focus on solutions: the smartest people, the biggest ideas, and the most ground breaking technology shaping our future.
Subscribe