Surrounding Earth, and extending far out into space, is a powerful magnetic field, fueled by the liquid swirling in the planet’s center. But the moon, on the other hand, doesn’t have a molten core anymore and so does not have a magnetic field today, like it once did — or so scientists long thought.

New evidence proves that the moon never had a long-lived magnetic field. This discovery changes the way we understand the moon’s geologic history and the sorts of resources that explorers may discover on the moon in the future.

A lunar puzzle: Based on studies during the 1980s Apollo era, researchers concluded that the moon previously had a magnetic field as powerful as Earth’s. The rock samples showed magnetism, which the researchers said was produced by a fluid outer core, like Earth’s. Such a “geodynamo” — a spinning, convecting, and electrically conducting fluid — can create and sustain a magnetic field. Earth’s large, dynamic core is essentially a power source for our magnetic field.

This discovery changes the way we understand the moon’s geologic history and the sorts of resources that explorers may discover on the moon in the future.

But, what has puzzled scientists for decades was that the moon’s core is tiny by comparison. And as John Tarduno, a researcher from the University of Rochester, points out, the measurements from the ‘80s used “techniques that may not accurately record the magnetic field.”

It was about time for an update.

Tarduno and his team decided to rethink the moon’s magnetic field using new techniques. They published their results in the journal Science Advances.

A new conclusion: The team used the same Apollo-era samples but analyzed the materials differently — with CO2 lasers, which heat the lunar samples briefly. This method meant that they didn’t change the materials by testing them. Then they measured the samples using very sensitive superconducting magnetometers.

“One of the issues with lunar samples has been that the magnetic carriers in them are quite susceptible to alteration,” Tarduno said in a statement. “By heating with a laser, there is no evidence of alteration in our measurements, so we can avoid the problems people may have had in the past.”

The team’s findings contradict long-held beliefs about the moon’s magnetic field. They determined that the magnetism in the samples was likely due to collisions, from objects like meteorites or comets — not a magnetic field.

Why this matters: Magnetic fields protect celestial bodies from solar wind — damaging solar radiation. Life on Earth couldn’t survive without that protection. So knowing if a magnetic field existed on the moon is a big deal.

Because the moon didn’t have a magnetic field to protect it from solar wind and radiation, it could have been exposed to volatiles, which would be implanted in the lunar soil. Carbon, hydrogen, water, and helium 3, a helium isotope that isn’t abundant on Earth, might be among these volatiles.

“Since the Apollo missions, there has been this idea that the moon had a magnetic field that was as strong or even stronger than Earth’s magnetic field at around 3.7 billion years ago,” Tarduno said in a statement. But his new study completely changes things, and Tarduno calls this discovery “a new paradigm for the lunar magnetic field.”

Because the moon didn’t have a magnetic field to protect it from solar wind and radiation, it could have been exposed to volatiles, which would be implanted in the lunar soil, reports Futurism. Carbon, hydrogen, water, and helium 3, a helium isotope that isn’t abundant on Earth, might be among these volatiles.

This new information could mean a change of plans for NASA’s Artemis mission of 2024. The data gathered then might help researchers decide if these volatiles can be recovered for human use. Helium, for example, has medical applications, as well as a fuel source.

“With the background provided by our research, scientists can more properly think about the next set of lunar experiments to perform,” Tarduno says. “These experiments may focus on current lunar resources and how we could use them and also on the historical record of what is trapped in the lunar soil.” 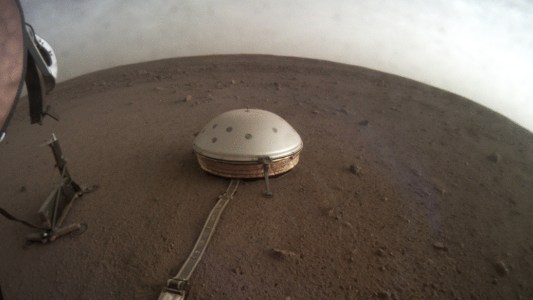 With information garnered from marsquakes, researchers have created the first complete image of the interior structure of Mars.

Outer Space
Scientists listen to marsquakes to map the inside of the planet
Subscribe to Freethink for more great stories
Subscription Center
Sections
Video
Freethink
Subscribe
We focus on solutions: the smartest people, the biggest ideas, and the most ground breaking technology shaping our future.
Subscribe