Astronomers have created the first ever 3D map of the heliosphere, the part of the universe influenced by our sun’s solar wind — and the boundary where that influence stops.

“Physics models have theorized this boundary for years,” lead author Dan Reisenfeld from Los Alamos National Laboratory said in a press release. “But this is the first time we’ve actually been able to measure it and make a three-dimensional map of it.”

“Sphere” of influence? The solar wind is a stream of hot plasma that’s constantly flowing away from our sun and through the solar system.

This stream loses strength as it moves away from the sun until, finally, the force of the solar winds coming from other stars (interstellar winds) stop it from going any farther.

That boundary is called the heliopause. Everything beyond it is interstellar space, and everything within it is the heliosphere.

The challenge: The idea of the heliosphere has been around since the 1950s, but scientists have never been sure of what it looks like. Some have suspected it’s spherical, while others have proposed a shape like a deflated croissant.

Confirming the actual shape could improve our understanding of the solar system and how it interacts with interstellar space, but creating a map of the heliosphere isn’t exactly simple — the whole thing is massive, and its boundary is incredibly far away.

How it works: To create the first 3D map of the heliosphere, researchers from the U.S. and Poland looked at data collected by NASA’s Earth-orbiting Interstellar Boundary Explorer (IBEX) satellite.

Specifically, they relied on measurements of energetic neutral atoms (ENAs), which are produced when our solar wind particles collide with interstellar particles. By looking for patterns in those measurements, they could determine the location of the heliopause.

“The solar wind ‘signal’ sent out by the sun varies in strength, forming a unique pattern,” Reisenfeld said. “IBEX will see that same pattern in the returning ENA signal, two to six years later, depending on ENA energy and the direction IBEX is looking through the heliosphere.”

“This time difference is how we found the distance to the ENA-source region in a particular direction,” he continued. “In doing this, we are able to see the boundary of the heliosphere in the same way a bat uses sonar to ‘see’ the walls of a cave.”

The exact length of that tail is still unknown, but the astronomers don’t consider this map to be a finished product.

IBEX will continue until 2025, and another mission — the Interstellar Mapping and Acceleration Probe — will launch that year to continue where it leaves off. Data from those missions will be used to refine the map of the heliosphere, improving our understanding of both it and our place in the universe in the process. 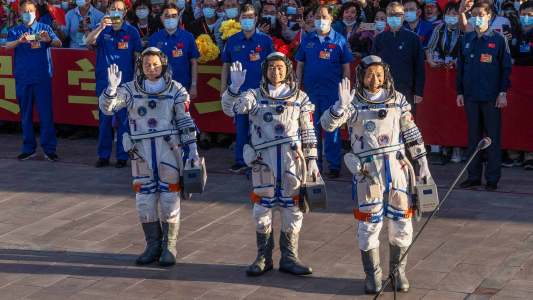 The new Chinese space station has received its first crew, a huge milestone for a project that began nearly 30 years ago.