If you’re wondering whether to be bullish or bearish on the commercial space race, consider this: Private space companies received more venture capital funding last year than they did in the previous 15 years combined. 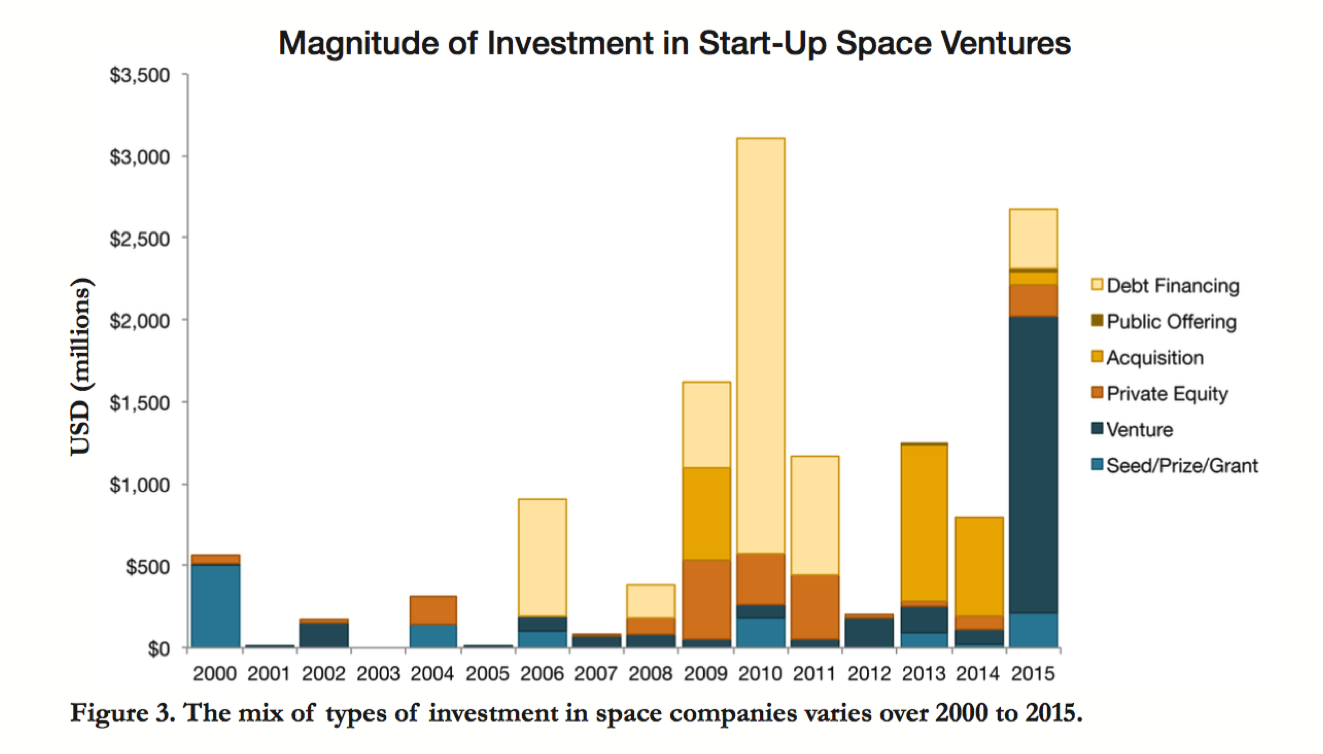 That data point (and the accompanying chart) comes from a report released earlier this year by the Tauri Group, an analytic consulting firm that specializes in collecting intelligence on the aerospace industry. It paints a comprehensive picture of who’s betting big on which parts of the space sector. You might be surprised to learn it’s not the sectors we’re always hearing about.

Most space news that makes the front page of general interest websites is about rockets. Rockets are sexy, and solving the re-usability problem–i.e., figuring out how to get multiple uses out of each rocket without having to complete drastic overhauls between launches–really does have the potential to open up low-Earth orbit by drastically decreasing launch costs.

But there’s another sector in the space startup world that doesn’t need nearly as much refining. In fact, it’s already here, and investors are buying in like crazy: Tiny satellites.

These “nanosats” weigh less than 100 pounds, can be developed for thousands–rather than millions–of dollars, and are built using commercially available technology.

These “nanosats” weigh less than 100 pounds, can be developed for thousands–rather than millions–of dollars, and are built using commercially available technology. They can track weather and provide GPS data, and launch costs for sending up an entire pack of these tiny satellites can be under six figures. None of this was true for conventional satellites even 15 years ago.

To get a sense of how fast the market is growing for microsats (also called CubeSats and nanosats), take a look at this chart from Parabolic Arc, which breaks down VC investment by category between 2008 and 2015: 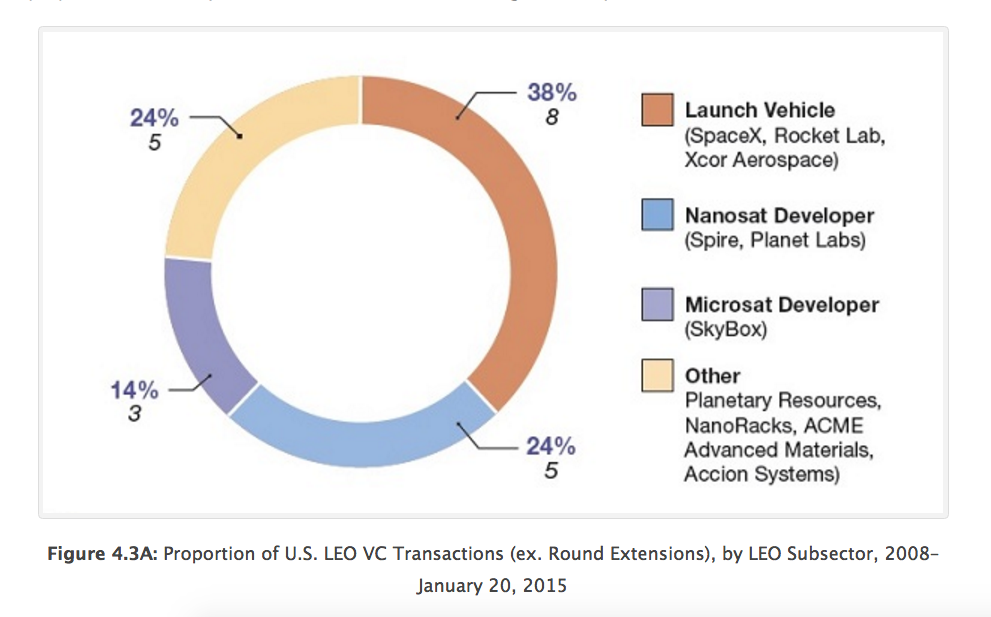 Nearly 40% of the venture capital that’s flooded into the private space scene since 2008 has gone to companies that make small satellites. Parabolic Arc points out that if you exclude Google’s $1 billion investment in SpaceX, “nanosats and microsats represent 63 percent of investment dol­lars” between 2008 and 2015.

Why are tiny satellites a big deal?

We currently use satellites of every size for broadcasting media, tracking the weather, and navigating the world via GPS. But there are data gaps for conventional satellites, which are powerful but have limited coverage areas. Flocks of small satellites can provide data from a larger coverage area more quickly. CubeSat maker Spire, which we profile in this week’s episode, provides an incredible example of the revolutionary potential of using a large number of small satellites, as opposed to a handful of big ones, in the world of international shipping.

Whereas conventional satellites have coverage gaps that leave shipping companies and their customers in the dark for large stretches of transport time, Spire says its CubeSat network can track vessels practically in real-time, no matter where they are. With more companies relying on arctic shipping routes due to reduced sea ice, there’s also a new need for accurate search-and-rescue information. Again, conventional satellites create huge delays in transmitting information over large parts of the ocean. Spire’s network means ships have eyes on them almost 24 hours day, which could dramatically reduce the response time in the event of an emergency.

The company’s network can also be used to track maritime piracy, illegal commercial fishing, and provide verification for insurance claims.

In short, what CubeSats promise is uninterrupted, 24-hour geospatial data.

But they also have the potential to democratize atmospheric and space research by lowering the satellite price-point for university researchers. And as rocket companies bring down their per-pound launch costs, there’s simply no telling how big the CubeSat market could get.

That’s why investors are going all-in on small satellites

In addition to breaking down investments by sector, Tauri Group also interviewed space investors about why they’re buying into markets. The argument for satellites is pretty compelling:

Interviewees saw increased investment opportunities primarily (though not exclusively) related to small satellites, driven by decreased costs and by new potential for returns. Interviewees pointed to the reduction in cost of satellites associated with what one called the “CubeSat revolution” and to “commodity components that are powerful and cheap.” Satellite systems use off-the-shelf technology and very small satellites that are easily and quickly manufactured to present a much different value proposition for investors. The timeline from design to operations has also shortened significantly, which means investors can potentially expect to see returns on their investment more quickly.

A partner in a major venture capital firm said, “You actually can experiment now. If you are spending $300 million on a satellite and launch, you have to know exactly what you are doing. You can’t do things prospectively. You really can’t take much risk. It is hard to take a risk on completely new technology that is so new that it might not be space-qualified if it costs that much. But if it is cheap to try things out, people are not limited.”

Tauri spoke to multiple parties who didn’t equate investing in small satellites with investing in the space industry writ large. Instead, they saw it as just another tech sector with big potential returns.

If you want to know why there’s so much hype–and investment–around small satellites, you need to watch our episode on Spire: 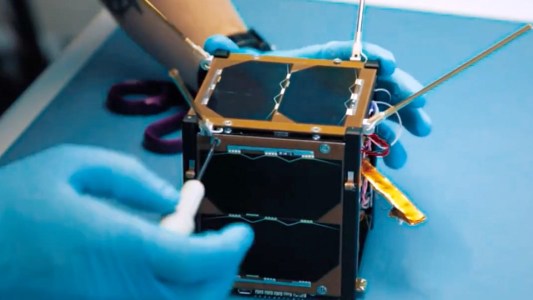 Spire’s satellites fit in the palm of your hand, cost a fraction of their predecessors, and transmit more data than…

Outer Space
The startup that may be on the cusp of revolutionizing the satellite industry
By Mike Riggs
Subscribe to Freethink for more great stories
Subscription Center
Sections
Video
Freethink
Subscribe
We focus on solutions: the smartest people, the biggest ideas, and the most ground breaking technology shaping our future.
Subscribe