Satellites are pretty awesome. They have enabled us to peer into the deepest parts of the universe, create a worldwide high-speed internet, and even stop us from getting lost on this beautiful Earth, thanks to GPS.

But in February of this year, a cutting edge tiny satellite launched that is unlike any before it. Not only will it aid in our fight against climate change, but it could also save hundreds of lives from gruesome deaths. Welcome to the incredible world of NACHOS!

This tiny 6.25 kg (13.8 lbs) satellite has a next-gen hyperspectral imaging system onboard that is capable of detecting trace gasses in our atmosphere at an unprecedented resolution. It has been tuned to detect nitrogen dioxide (NO2) and sulfur dioxide (SO2) with incredible sensitivity. This sensitivity is what makes NACHOS such a powerful satellite.

But how does it save lives and fight climate change?

Seeing through smog: Let’s start with climate change: for us to fight it, we have to know what is actually happening. NACHOS isn’t very good at detecting the most common human greenhouse gasses, such as carbon dioxide or methane.

However, both NO2 and SO2, which NACHOS can see with pinpoint clarity, significantly impact the environment. Clouds easily absorb SO2, turning their rain acidic (sulfuric acid), which hurts crops, forests, and even coastal ecosystems.

Then there is nitrogen oxide, which eats away at ozone, poisons plant life, and creates deadly smog.

NACHOS’ imaging system can detect trace gasses in our atmosphere at an unprecedented resolution.

Even though we know that cars, industry, aviation, shipping, and even agriculture can be the source of these gasses, it can be very hard to locate the actual source of a deadly cloud of smog or acid rainfall. This is because the gasses can travel hundreds of miles from their original source before any ill effects are seen, and our satellites can’t detect them with enough sensitivity to see where they were emitted.

A great example of this is a recent study that found that gasses that depleted the ozone layer during the 1990s were major contributors to Antarctic climate change, but we don’t know exactly where they came from. This also shows how far-reaching these gasses can be as the nearest possible source is thousands of miles away.

Plugging the leaks: This is where NACHOS comes in. With its unbelievable sensitivity, it can find the source of nitrogen dioxide and sulfur dioxide to a resolution of around 100 acres. This allows NACHOS to find the factory, leaky pipeline, ship, or person responsible for these emissions.

This allows us to do two things. First, shut down or mitigate the process that is creating the damaging gasses quickly, reducing a lot of environmental damage. Second, this indisputable data can be used to make companies, countries, and even people culpable for the damage they have caused.

Volcano warning: But NACHOS doesn’t just help to save Earth. It could also directly save hundreds of lives a year from death by volcano!

Volcanoes kill around 540 people a year by causing a myriad of deadly disasters, from tsunamis to pyroclastic flows to poisonous gas releases and even ash falls. (Not to mention lava!) Seismic sensors around the majority of our deadly volcanoes keep an eye out for faint tremors that could herald an impending eruption.

However, this doesn’t always give early enough warning to prepare and many countries can’t afford these expensive systems. This inability to have a predictable early warning is what causes so many people to die from volcanoes each year.

But, thanks to NACHOS, this can change. The vast majority of volcano eruptions are preceded by a tiny amount of sulfur dioxide seeping through the rocks. In fact, this happens well before any seismic activity occurs. Sadly, it is nearly impossible to detect this from the ground as it is too faint and emits from random porous regions on the volcano.

But NACHOS can clearly spot it, which could potentially give the entire world a volcano early warning system. This will give us more time to evacuate nearby areas, prepare international aid, protect infrastructure/industry/agriculture, evacuate tsunami flood planes, shut down dangerous machines (like nuclear reactors), and even mitigate wildlife damage.

Not only will this save lives during the eruption, but it will also allow life to return back to normal far quicker.

However, NACHOS has only just been launched, and we have yet to test out this incredible ability. If it is successful, the skies could soon be full of hundreds of NACHOS-like satellites. Even if it can only deliver half of its promises, it will still be a revolutionary piece of technology that makes the world a better, safer, and more sustainable place. 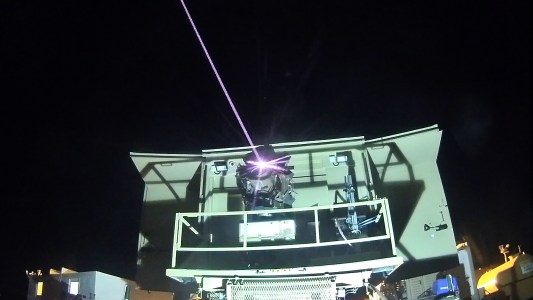 Aerospace
Israeli and US Navy lasers successfully shoot down drones, rockets, artillery
By B. David Zarley
Subscribe to Freethink for more great stories
Subscription Center
Sections
Video
Freethink
Subscribe
We focus on solutions: the smartest people, the biggest ideas, and the most ground breaking technology shaping our future.
Subscribe