In 2019, astronomers released the first image of a black hole, a feat that required the use of a virtual telescope the size of the Earth.

They’ve now released a new image of that black hole — and this one is even more remarkable than its predecessor.

The First Image of a Black Hole

A black hole is a place in spacetime where gravity is so strong, nothing can escape its pull, not even light.

The boundary of a black hole — the point of no return for anything near it — is called the event horizon. While we can’t actually see anything inside a black hole, we can see the hot gas and dust swirling around this boundary.

Two years ago, astronomers used measurements from the Event Horizon Telescope (EHT), a network of eight radio telescopes scattered around four continents, to create an image of the supermassive black hole at the center of the M87 galaxy, 53 million light-years away from Earth.

That first image of a black hole looked like a glowing orange ring with one side slightly brighter than the other — that was the side of the black hole closer to Earth.

Now, they’ve gone back through the same EHT data to create a new black hole image that depicts it in even more detail.

To understand what’s going on in this new black hole image, you need to know a bit about light polarization.

Light is a wave, and in its natural state, it’s unpolarized — that means the wave goes up and down but also to the left and right randomly as it travels through space.

Polarized light moves along a single plane, oscillating in just two dimensions instead of three.

Light can become polarized if it travels through certain filters, such as the ones in polarized sunglasses. It’s easier to see objects in polarized light — there’s less glare — which is why we wear those sunglasses.

Hot, magnetized regions of space — like the area around a black hole — can polarize light, too.

This new black hole image looks sharper because the astronomers focused on the movement of the polarized light around the black hole — the lines we see in the image are its magnetic field lines.

“It’s like putting on a pair of polarized sunglasses on a bright sunny day — all of a sudden you can see what’s going on,” Sheperd Doeleman, founding director of the EHT, told the New York Times.

“Now we can actually see the patterns of these fields in M87 and begin to study how the black hole is funneling material to its center,” he added. This could tell us more about how black holes are created and how they grow.

The EHT researchers just published two papers on the new black hole image, but they’re already looking for ways to top the photo.

“Even now, we are designing a next-generation EHT that will allow us to make the first black hole movies,” Doeleman told the Harvard Gazette. “Stay tuned for true black hole cinema.”

Physics
The case for dark matter has strengthened
Though it makes up about 26% of the Universe, we cannot see dark matter. But we know it’s there because we can see its effects. 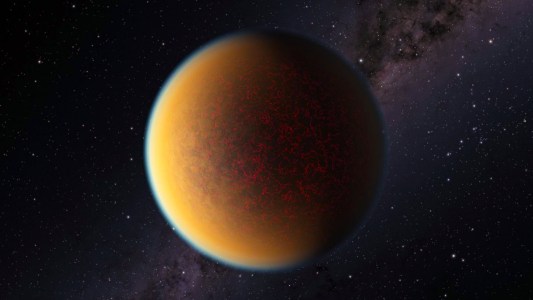 A distant exoplanet, GJ 1132 b, appears to have created a second atmosphere for itself after being stripped of its first.

Outer Space
A distant exoplanet made itself a second atmosphere
Subscribe to Freethink for more great stories
Subscription Center
Sections
Video
Freethink
Subscribe
We focus on solutions: the smartest people, the biggest ideas, and the most ground breaking technology shaping our future.
Subscribe