When astronomers discovered Pluto in 1930, it was the most distant known object in our solar system, orbiting the sun from a distance of about 3.6 billion miles.

Pluto held that title for nearly 50 years, but as telescope technology has advanced, astronomers have found more and more objects farther and farther away.

Now, there’s a new most distant known object in our solar system: a planetoid 12 billion miles away from the sun.

Planetoid is a term astronomers use to describe large asteroids or minor planets — Pluto itself is a planetoid, having been demoted from planet in 2006.

In 2018, a multi-institution team of astronomers using the Subaru 8-meter telescope in Hawaii discovered a new planetoid. They suspected it was even farther away from the sun than “Farout,” the current record holder for distance, so they nicknamed it “Farfarout.”

They then spent the next couple of years using the Gemini North telescope (also in Hawaii) and the Magellan telescope in Chile to track the planetoid and confirm its distance from the sun.

“A single orbit of Farfarout around the Sun takes a millennium,” researcher David Tholen said in a press release. “Because of this long orbital period, it moves very slowly across the sky, requiring several years of observations to precisely determine its trajectory.”

Now, three years after Farfarout’s discovery, the International Astronomical Union, the global astronomy authority, has confirmed that it is the most distant known object in the solar system and given it an official name: 2018 AG37.

“Farfarout’s orbital dynamics can help us understand how Neptune formed and evolved, as Farfarout was likely thrown into the outer solar system by getting too close to Neptune in the distant past,” researcher Chad Trujillo said in a press release.

“Farfarout will likely interact with Neptune again since their orbits continue to intersect.”

Farfarout is just the tip of the iceberg.

For now, the planetoid may be the most distant known object in the solar system, but its reign probably won’t last nearly as long as Pluto’s — armed with today’s telescopes, astronomers could find a Farfarfarout at any moment.

“The discovery of Farfarout shows our increasing ability to map the outer solar system and observe farther and farther towards the fringes of our solar system,” researcher Scott S. Sheppard said in the press release.

“Farfarout is just the tip of the iceberg of solar system objects in the very distant solar system,” he added.

Physics
The case for dark matter has strengthened
Though it makes up about 26% of the Universe, we cannot see dark matter. But we know it’s there because we can see its effects. 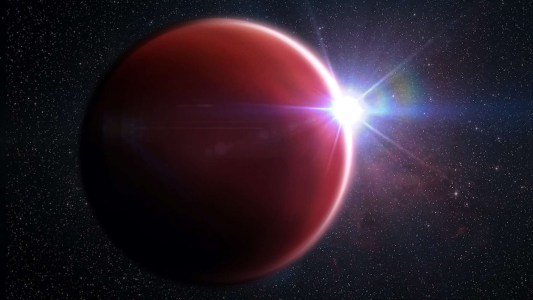 Astronomers have discovered a first-of-its-kind cloudless hot Jupiter — and it could expand our understanding of exoplanet formation.

Astronomy
This cloudless “hot Jupiter” is unlike any known exoplanet
Subscribe to Freethink for more great stories
Subscription Center
Sections
Video
Freethink
Subscribe
We focus on solutions: the smartest people, the biggest ideas, and the most ground breaking technology shaping our future.
Subscribe