Solar panels in space could one day beam continuous, concentrated energy back to Earth. Earlier this year, scientists at the Pentagon confirmed that a small satellite they launched in 2020 has successfully converted sunlight into electricity.

The satellite they tested is only the size of a pizza box and can generate just enough electricity to power one computer tablet. But if we’re able to create a network of larger solar satellites in space, then that could potentially allow us to generate and distribute power anywhere in the world.

Terrestrial solar panels only collect light during the day, but a solar satellite is not inhibited by darkness, clouds, or the atmosphere, so it can collect direct sunlight all the time. Solar panels on the ground also have to deal with seasons, where the Earth’s axis tilts the hemisphere away from direct rays of sunlight.

Power Technology reports that in an average winter month in Europe only “3% of sunlight reaches Earth, while satellites in space could gather energy for 99% of the year.”

“If we could capture the boundless sunlight in space, where it’s brighter than anywhere on Earth, (we could) send it to places that are difficult and expensive to get energy to today,” Paul Jaffe, a co-developer of the project, said in a 2019 press release.

The Pentagon’s test solar satellite, called PRAM, is circling the Earth every 90 minutes. It is designed to harness the pure, unfiltered sunlight before it reaches the Earth’s atmosphere. This sunlight is a lot stronger than the light that makes it to Earth because it preserves energy in the form of blue waves. (Blue waves scatter once they hit the atmosphere, which is why the sky is blue).

“We’re getting a ton of extra sunlight in space just because of that,” Jaffe told CNN.

In theory, the electricity gathered by PRAM would be converted into microwaves and then beamed back to Earth, where it would then be collected and converted back into electricity that can be distributed to a grid.

This experiment with PRAM doesn’t include actually sending the electricity back to Earth, though scientists say that the technology needed to do that has already been proven.

Any actual solar satellite network would likely have to operate at a higher altitude than PRAM in order to capture more sunlight. While this means more energy, it also means that the electronics would be subjected to more intense sunlight, which could be damaging.

However, the researchers say they outfitted PRAM with onboard heaters to try to test the electronics’ usability under more intense conditions — and it worked.

Space-based solar power could have a range of practical applications. It’s mostly being looked at for use in getting power to remote locations and aiding populations affected by natural disasters.

Chris DePuma, co-developer of the PRAM mission, told CNN that if the technology was available today it could have had immediate applications for those Texans affected by the collapse of their energy infrastructure.

“My family lives in Texas, and they’re all living without power right now in the middle of a cold front because the grid is overloaded,” DePuma said in late February. “So if you had a system like this, you could redirect some power over there, and then my grandma would have heat in her house again.”

That’s the unique thing about energy from space-based solar panels — it can be sent anywhere.

“You can send power to Chicago and a fraction of a second later, if you needed, send it instead to London or Brasilia,” Jaffe told CNN.

Show Me the Money

As with most new technologies, the big challenge here is cost — can we make and deploy solar satellites in a way that’s economically feasible?

Right now, the answer is no. The cost to produce, launch, and build the satellites is simply too much. However, in recent years as space technology has advanced and commercialized, we’re starting to see that price tag drop — so the future looks hopeful. 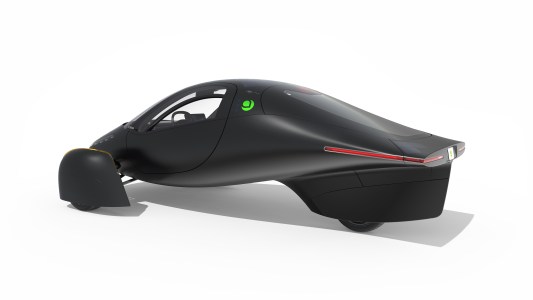 The Aptera solar car is expected to hit roads in 2021, but even if it’s not the next big thing in transportation, its design elements could be.