We are floating in a sea of junk — space junk, that is. There is an estimated 6,000 tons of useless, man-made objects circulating in low Earth orbit today.

Now, the space industry is looking for ways to clean up its mess in order to prevent harm to astronauts and the destruction of working spacecraft.

A Hunk of Trash

Sputnik’s sphere of aluminum alloy, and the rocket that was used to launch it, became the first two pieces of litter in the skies.

Even worse, pieces of junk often collide with each other, creating even more debris.

“Whenever a satellite sheds pieces, they tend to not shed one, but many, many pieces, hundreds of thousands of pieces depending on the type of collision,” Moriba Jah, Associate Professor at the University of Texas at Austin told NPR.

There are other sources of space junk, too — even peculiar ones: Elon Musk’s Tesla Roadster, the cremated ashes of a Star Trek’s Scotty, spatulas and toolboxes, and astronaut waste are all floating around in our solar system. (That’s right: for years spacecraft sewage was emptied overboard — astronaut urine, by the way, apparently makes a beautiful glow in space).

Space junk poses a serious danger to working spacecraft and astronauts. In the future, it could hamper space tourism, too.

On average, space debris can hit objects at a relative speed of over 22,300 miles per hour — 10 times faster than a speeding bullet. This means that even small objects, like the tiniest screw, can have explosive impacts upon collision.

Space junk mostly lives in low Earth orbit, a height of up to 1,200 miles. Not coincidentally, this is also where the majority of satellites orbit, putting many of them in harm’s way. This means many of the satellites that we need for things like communications are in danger of colliding with debris.

The International Space Station is also located in low Earth orbit. In the early morning of July 15, 2015, the crew came harrowingly close to a fatal collision — the three astronauts aboard, including American Scott Kelly, hunkered down in the Soyuz, a Russian vessel on the ISS that can detach from the ship and act as a lifeboat.

While waiting in hopes that the object would spare them, Kelly tried not to look out the window.

“We wouldn’t even fucking know if we got hit. We just would’ve been vaporized! ” he told the New Yorker.

The space junk missed the crew by only a mile and a half.

Space is like the wild, wild West — there’s no international law that dictates how a company or government should behave, nobody owns the territory, and there’s no accountability for what gets left behind.

Still, countries are realizing that this tragedy of the commons is bad for everyone. In recent years, there have been proposals for how to go about cleaning up space — and some are pretty creative.

In December 2019, the European Space Agency (ESA) announced plans to launch ClearSpace-1, the world’s first space debris clean-up mission. The spacecraft will carry a four-armed robot into low orbit where it will grab debris, then fall back down to Earth and “burn up in the atmosphere,” said the ESA.

We wouldn’t even fucking know if we got hit. We just would’ve been vaporized!

This robot is on a mission to clean up a particular piece of trash —  part of an ESA rocket that got left behind after a 2013 launch.

Capturing a moving object in space, of course, will have its challenges. One challenge is being able to calculate how the object is moving.

“Objects in space are free-floating and they can tumble on every axis at quite high speeds or low speeds,” said Muriel Richard-Noca, co-founder of ClearSpace.

“The intent here is to analyze and reconstruct the object’s movement once we get there with advanced image processing techniques such as deep-neural networks. These techniques will enable autonomous navigation around the debris and its capture. That is the image-processing challenge.”

Another challenge is actually reaching out and grabbing a moving object. When a cargo mission goes to the ISS, Richard-Noca explains, the two spacecraft talk to each other. But when ClearSpace-1 goes up, there won’t be a way to communicate with the moving debris.

“There is no signal coming from the debris to help us and we have to catch up with its tumbling. The capture is the most critical operational challenge.”

ClearSpace has a few more years to unravel that problem — the spacecraft isn’t due to lift off until 2025. But we shouldn’t wait too long to start cleaning up space, because the junk is multiplying and the clock is ticking. 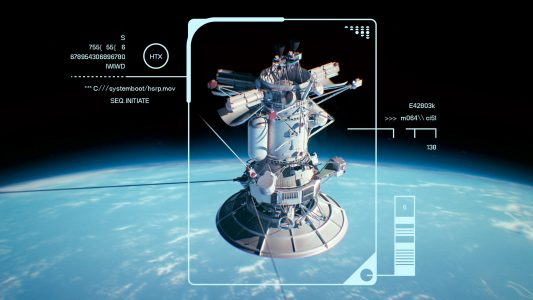 There are nearly 3,000 satellites in orbit, and all of them are subject to a breach in satellite security. Here’s how white hat hackers can help.

Series | Coded
Hacking satellites with $300 worth of TV gear6:19
Subscribe to Freethink for more great stories
Subscription Center
Sections
Video
Freethink
Subscribe
We focus on solutions: the smartest people, the biggest ideas, and the most ground breaking technology shaping our future.
Subscribe