SpaceX has finally landed a high-flying Starship rocket — but it has yet to do so without destroying the spacecraft in the process.

On March 3, SpaceX Starship SN10 — the tenth prototype of the massive Mars-bound rocket — lifted off from a Texas launch site and successfully landed.

That was a major win for SpaceX — its two previous attempts at a high-altitude Starship flight ended with the rockets coming in too hot and exploding upon impact.

“Third time’s the charm, as the saying goes — we’ve had a successful soft touchdown on the landing pad,” SpaceX engineer John Insprucker said just before the company’s webcast ended.

During the test flight, SpaceX Starship SN10 reached a peak altitude of 6.2 miles before executing a horizontal “belly flop” maneuver designed to increase air resistance and slow the rocket’s descent.

It then reignited its engines, returned to an upright position, and landed — albeit crookedly: the rocket’s landing legs appeared to have failed, leaving it tilted on the landing pad.

SpaceX’s cameras might have cut away from the landing site at that point, but the website NASA Spaceflight was still rolling when SpaceX Starship SN10 flew again a few minutes later, exploding into the air and landing in a fiery blaze.

SpaceX has yet to say what caused the unscheduled post-landing launch — a leaky fuel tank may have been responsible, according to the New York Times — but CEO Elon Musk didn’t seem too fazed by the explosion.

Your (Free) Ticket to the Moon

Now that SpaceX Starship SN10 has proven that it’s possible for the rocket to land intact, the company is one step closer to its ultimate goal of transporting people in the massive spacecraft.

SpaceX has already booked at least one crewed flight for the rocket, too — in 2023, it’s expected to take Japanese entrepreneur Yusaku Maezawa and 11 other people on a six-day trip around the moon and back.

The day before the test launch of SpaceX Starship SN10, Maezawa released a video in which he announced that he’s offering up eight spots on that fully paid private spaceflight — known as the “Dear Moon” mission — to members of the public.

The fashion tycoon is now accepting applications from anyone interested in a free ticket to the moon. The deadline to pre-register for the flight is March 14, and the screening process will begin a week later.

There are only two key criteria to qualify to join the mission.

“Whatever activity you are into, by going to space, I hope you can push its envelope, to help other people and greater society in some way,” Maezawa said in the video.

“Secondly,” he added, “you have to be willing and able to support other crew members who share similar aspirations.”

Because the plan is to go around the moon — and not just to it — the Dear Moon mission will take people farther from Earth than any other spaceflight, Musk said in Maezawa’s video.

But before that record-setting Starship jaunt can happen, SpaceX will need to figure out how to keep the rockets from exploding — at least until all of the crew members can safely disembark. 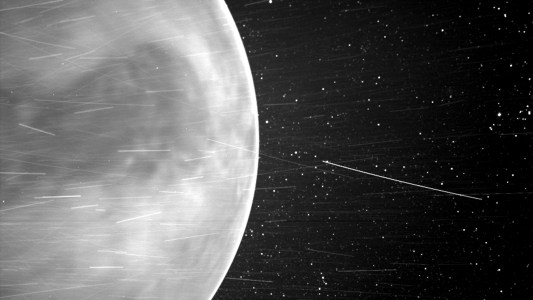 The Parker Solar Probe has taken an image of the surface of Venus that may change what we thought we knew about the planet — or possibly the probe itself.