A new study provides evidence that Venus’ crust is broken into chunks that move around like giant slabs of ice on a lake, driven by forces below its surface.

These signs of tectonic activity on Venus expand our understanding of the hellish planet — and may offer a window into Earth’s own geological past, too.

Tectonic activity on Venus: Earth’s solid top-most layer, the lithosphere, is broken into massive pieces we call tectonic plates. Forces below those plates can cause them to move, resulting in earthquakes, volcanoes, and other tectonic activity.

Venus has a lithosphere like Earth, but it was thought to be a solid, immobile shell, like the surface of our moon. This new study challenges that notion.

The discovery: An international team of scientists was using radar images from NASA’s Magellan mission to map the surface of Venus when they noticed evidence that parts of the crust had moved.

Using computer simulations, they determined that activity in the mantle layer below Venus’ surface was causing blocks of the lithosphere to move independently — some of these blocks were as large as Alaska, while others were about the size of Ireland.

“These observations tell us that interior motion is driving surface deformation on Venus, in a similar way to what happens on Earth,” lead author Paul Byrne from North Carolina State University said in a press release.

“It’s not plate tectonics like on Earth — there aren’t huge mountain ranges being created here, or giant subduction systems,” he added, “but it is evidence of deformation due to interior mantle flow, which hasn’t been demonstrated on a global scale before.”

Why it matters: The tectonic activity on Venus doesn’t mirror Earth’s right now, but it might not be all that different from the activity going on when our planet was just forming — meaning it may be giving us a glimpse into Earth’s geological history.

The discovery might help us track down Earth-like planets elsewhere in the universe.

“Heat flow from the young Earth’s interior was up to three times greater than it is now,” Byrne said, “so its lithosphere may have been similar to what we see on Venus today: not thick enough to form plates that subduct, but thick enough to have fragmented into blocks that pushed, pulled, and jostled.”

Additionally, Venus and Earth have about the same size, mass, and composition, but evolved to have incredibly different atmospheres and surfaces.

The more we can learn about Venus in general, the better equipped we’ll be to understand what it takes for planets like our own to form — and that might help us in the hunt for Earth-like planets elsewhere in the universe. 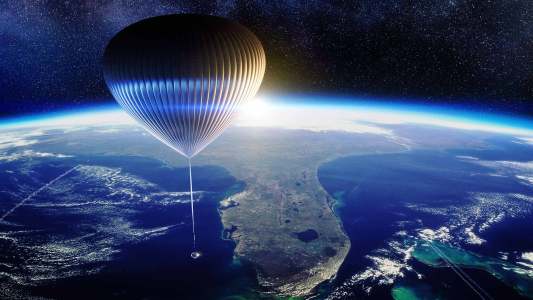 Space tourism company Space Perspective has begun selling tickets for rides in a stratospheric balloon that can reach the edge of space.

Aerospace
You can now buy a balloon ride to the edge of space
By Kristin Houser
Subscribe to Freethink for more great stories
Subscription Center
Sections
Video
Freethink
Subscribe
We focus on solutions: the smartest people, the biggest ideas, and the most ground breaking technology shaping our future.
Subscribe