Now, it’s ready to do something else that’s never been done before: build the world’s first drone air taxi terminal.

On April 22, EHang announced plans to build the world’s first air taxi terminal in Hezhou, China, to support flights of its two-seater flying taxi, the EHang 216.

Our mission is to make safe, autonomous, and eco-friendly air mobility accessible to everyone.

The 27,000-square-foot terminal will be three-stories tall, with the first floor serving as a reception hall and the second as a passenger waiting area.

The third floor will be the roof-top departure and arrival zone, which will accommodate the simultaneous take-off or landing of up to four EHang 216s at once.

In total, EHang plans to operate 20 of the self-flying taxis at the facility, which it expects to have built and ready for action by the end of 2020.

Each EHang 216 features eight arms, with 16 total propellers, giving it a flying time of about 21 minutes and a range of 9.9 miles.

While that short range greatly limits the vehicle’s ability to actually transport passengers anywhere, it is ideal for another purpose: aerial sightseeing.

Hezhou is known for its stunning natural scenery, with forests covering more than 70% of its land. EHang hopes tourists will flock to its air taxi terminal to enjoy a brief birds-eye view of the beauty.

“Hezhou is a beautiful city with rich tourism resources and we are excited to enhance their appeal with our AAVs (autonomous aerial vehicles),” EHang CEO Hu Huazhi said in the announcement.

Even before it announced plans to build the world’s first air taxi terminal, EHang was already having a landmark year.

In January, it demonstrated the EHang 216 in North Carolina after receiving its first-ever approval from the FAA to fly over U.S. soil.

There weren’t any humans onboard the air taxi used for that demo, but the jaunt does set the stage for future FAA approvals of flights with passengers.

“Our mission is to make safe, autonomous, and eco-friendly air mobility accessible to everyone,” Hu said in a news release, “and this trial flight represents a significant step towards bringing our air mobility solutions to the U.S. market.”

Just two months later, EHang made strides in establishing a foothold in Europe, receiving operational permits in both Norway and Spain.

In Spain, the company will work with the governments of Llíria and Seville to launch air taxi pilot programs, exploring all the ways AAVs might help alleviate their cities’ transportation woes — and, in the case of Seville, potentially bring in more tourist dollars.

“(A)s a popular tourist city, we hope to open up flying routes for sightseeing so that visitors from around the world can experience the spectacular cityscape of Seville by air,” Hu said. 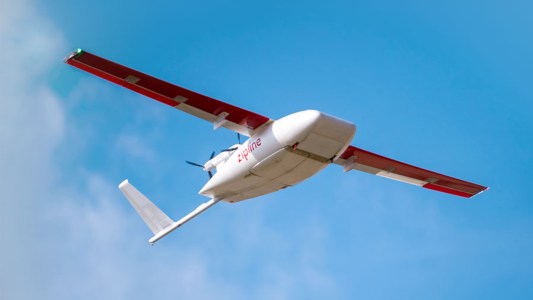 In Ghana, Zipline is helping speed up coronavirus testing by using drones to deliver test samples, and it wants to bring the service to the U.S.