Engineers in Japan have set a new world record for fastest internet speed — and it’s so fast, you’d be able to download nearly 80,000 movies in just one second.

Need for speed: Internet speed is typically measured by how much data can be transmitted between two devices in one second.

These cables transmit data using pulses of light, which travel along thin optical fibers with glass or plastic cores.

To break the record for fastest internet speed, researchers at Japan’s National Institute of Information and Communications Technology developed an experimental optical fiber with four cores, instead of just one.

They then combined their fiber with a laser that fired pulses at different wavelengths and multiple signal amplification techniques. This enabled them to transmit data over a distance of more than 1,800 miles at 319 Tb/s.

Perfect fit: The laser and amplifiers used to break the fastest internet speed record are not cheap, so don’t expect 300 Tb/s home internet any time soon.

However, there is one part of the experiment that could have an impact on your life in the not-so-distant future: the optical fiber.

The researchers managed to pack all four cores into a fiber the same diameter as the single-core fibers used to deliver today’s fiber-optic internet. That means it might not be too difficult to integrate the tech into existing infrastructure.

“[I]t is hoped that such fibers can enable practical high data-rate transmission in the near-term, contributing to the realization of the backbone communications system necessary for the spread of new communication services beyond 5G,” they write in their paper.

Physics
Scientists blow up their lab after creating strongest magnet ever
Scientists knew that it would probably explode, but they did not expect to reach such a record magnetic field. 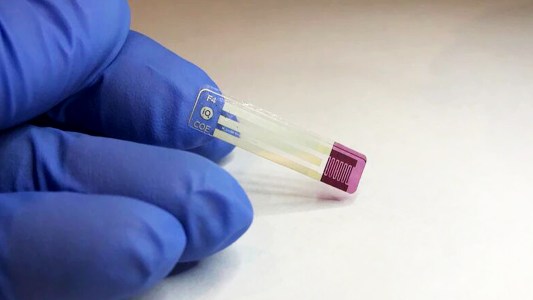 A needle-free diabetes test that measures glucose levels from saliva, not blood, could be ready for consumers as soon as 2023.