Airbus is developing a laser communication system to beam fast, secure Wi-Fi to aircraft in flight.

Laser communication 101: Airplanes typically get their Wi-Fi signals from cell towers on the ground or satellites in space.

In either case, the data travels over radio waves, and the radio-frequency spectrum is getting crowded due to increased demand. That crowding can lead to bottlenecks that affect internet connectivity and speed.

Laser communication systems encode data into optical light waves instead of radio waves. They transmit data much faster than radio-based systems and are more secure.

The UltraAir terminal: Airbus is working with the Netherlands to develop and demonstrate a laser communication terminal for aircraft called “UltraAir.”

This terminal will allow aircraft to connect with a satellite in geostationary orbit more than 22,000 miles above Earth. That satellite will connect to a laser communication ground station, developed by the European Space Agency (ESA).

Why it matters: The fastest inflight Wi-Fi available right now has a top data-transmission rate of 70 megabits per second. Airbus predicts that the UltraAir system could provide aircraft with several gigabits per second.

While faster inflight Wi-Fi will surely appeal to commercial airline passengers, the increased security of the laser communication system could make it incredibly useful for military applications.

The aerospace company also expects the UltraAir terminal to be lighter and less power-hungry than the systems planes currently use for radio-based Wi-Fi, adding to its appeal.

The laser communication system could potentially improve speeds from 70 Mbps to several gigabits.

Laser’s time to shine: Laser communication isn’t new, but the need for an alternative to radio-based systems is accelerating the development of the tech, and Airbus isn’t the only company attempting to bring it to aircraft — SpaceX and Space Micro are two others.

The major challenge to laser communication has been the susceptibility of lasers to atmospheric disturbances — something as simple as fog can affect the quality of a transmission — so Airbus will need to prove that UltraAir can work under any weather conditions.

The next steps: The company expects to conduct its first lab tests of the laser communication system before the end of 2021.

The following year, it’ll test the UltraAir terminal’s ability to connect (from the ground) to a satellite relayed to the ESA station. In-flight tests could happen as soon as mid-2022. 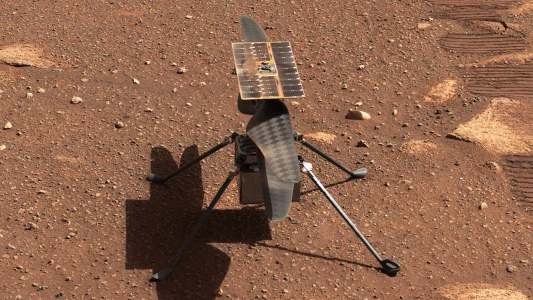 NASA’s Ingenuity helicopter has made history on Mars, achieving the first controlled flight on another planet.