NASA’s Ingenuity helicopter just became the first craft of any kind to fly on another planet.

“Now, 117 years after the Wright brothers succeeded in making the first flight on our planet, NASA’s Ingenuity helicopter has succeeded in performing this amazing feat on another world,” Thomas Zurbuchen, NASA’s associate administrator for science, said in a news release.

Making space history: The Ingenuity helicopter landed on Mars on February 18 after hitching a ride aboard NASA’s Perseverance rover.

The chopper’s first flight was delayed a couple of times so that NASA could address a testing anomaly and install a software update, but on April 19, Ingenuity finally lifted off.

The helicopter hovered 10 feet above the surface of Mars for 30 seconds before touching back down. The whole flight lasted just under 40 seconds.

However,  NASA didn’t find out that the mission was a success until three hours later. The Mars helicopter had to transmit the data to the Perseverance rover, which then sent it to Earth where it was received at 6:46 a.m. EDT.

Why fly on Mars? The ability to fly crafts on other planets could be hugely useful for exploration and even colonization missions.

A Mars helicopter might one day conduct surveys of terrain too treacherous for ground-based rovers to explore. If designed to carry payloads, it could move samples from one part of the planet to another or even quickly transport equipment between future Martian colonies.

The challenge: Helicopters generate lift by forcing air toward the ground with their rotors, but the air on Mars is much thinner than it is on Earth — and thinner air makes it more difficult to generate that lift.

“To make (Ingenuity) fly at that low atmospheric density, we had to scrutinize everything, make it as light as possible while being as strong and as powerful as it can possibly be,” Mimi Aung, project manager for the Mars helicopter, said in 2018.

Based on that test, Ingenuity could end up flying as many as five times, and while it won’t ever fly much higher, it could end up traveling up to 160 feet away from its launch site and back during later flights.

Editor’s Note, 4/19/21, 3:00 PM ET: This article was updated to include NASA’s tweet featuring the Ingenuity helicopter in flight. 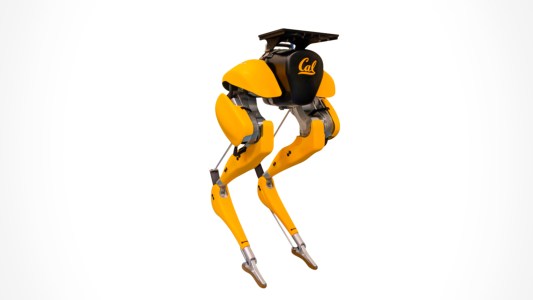 A pair of robot legs were able to teach themselves to walk thanks to a unique twist on reinforcement learning, a common AI training technique.

Robotics
These robot legs taught themselves to walk
Subscribe to Freethink for more great stories
Subscription Center
Sections
Video
Freethink
Subscribe
We focus on solutions: the smartest people, the biggest ideas, and the most ground breaking technology shaping our future.
Subscribe