The push to transition to electric vehicles is getting stronger — General Motors, Ford, and Volkswagen have all made the pledge to ramp up the production of electric, zero-emission vehicles by the 2030s.

Right now, EVs make up only 3% of new car sales globally. That’s because for many consumers today, EVs are simply too expensive and too much of a hassle to fuel up compared to gas-powered cars, thanks largely to the lithium-ion batteries used to power them.

For EVs to really catch on and help lower carbon emissions, many experts say it’ll take more than a pledge from major automakers. We’ll need to develop a whole new type of battery — and lithium-metal batteries may hold the answer.

The Problem With Today’s Batteries

The EVs produced today use lithium-ion batteries, the same type of battery that’s in your computer or smartphone. These batteries have enabled us to do things we once thought impossible — like power our devices on-the-go.

However, they do have a few major shortcomings: they’re expensive, heavy, and can die quickly. (Also, in electric vehicles, they’ve been known to occasionally burst into flames in the event of a collision. Yikes.)

Batteries using metallic lithium are lighter weight, can run twice as long, and hold more energy than most of today’s batteries.

Lithium-ion batteries are made up of two different materials on each end — called electrodes. One is negatively charged (the anode) and the other is positively charged (the cathode). In between these materials is a liquid chemical (the electrolyte) that carries the ions back and forth between the two oppositely charged ends, creating an electrical current that flows out to whatever device you’re trying to power.

With lithium-ion batteries, the negatively-charged electrode is usually made from graphite. The main problem with graphite is that it’s big and heavy — and it doesn’t actually contribute to the battery’s overall energy production.

But if we could create a battery where every electron could be put to use creating and storing energy, it would be a lot lighter and more powerful.

Metallic lithium, the lightest metal on the periodic table, is considered the holy grail of battery material because it has the highest energy density. Batteries using metallic lithium are lighter weight, can run twice as long, and hold more energy than most of today’s batteries.

Because lithium-ion batteries use heavy graphite instead of lithium metal, they’re at a disadvantage when it comes to energy density. Unlike graphite, metallic lithium isn’t just dead weight — it’s actually contributing to the battery’s overall energy production.

But there’s a hitch with metallic lithium: it’s super reactive. Being in contact with any liquid, including an electrolyte (the chemical used to transport the ions back and forth) can degrade the battery by causing tiny crevices, called dendrites, to form. These dendrites can short-circuit the cell, potentially causing it to combust.

Solid-state batteries could lower costs and improve the safety of electric vehicles.

This is the big reason why you won’t find lithium-metal batteries in your Tesla or electronic devices.

If they’re going to be the next big thing in battery innovation, researchers have to create an electrolyte that won’t degrade the metal yet still allows the ions to easily pass through it.

That’s a tall order — but the solution is likely a solid electrolyte.

The idea of a solid-state battery is decades-old. However, so far, no one’s been able to make it practical.

But QuantumScape, a battery startup that spun out of Stanford, now claims to be doing just that.

From Liquid to Solid

QuantumScape is being tight-lipped about what exactly makes up their new solid-state electrolyte — the only thing the company will say is that it’s a ceramic, according to MIT Technology Review.

“Any battery that can meet these requirements can really open up the 98% of the market in a way you can’t do today,” he said.

Internal data released by the company shows that a single-layer solid-state battery can charge up to 80% capacity in less than 15 minutes. (For comparison, in 2019, Tesla was able to charge a Model 3 from 5% to 90% in 37 minutes). It also retains more than 80% of its capacity after 800 charge cycles and, importantly, it doesn’t allow dendrites to form and is non-combustible.

“QuantumScape has set me back on my heels,” Nancy Dudney, a battery researcher at Oak Ridge National Laboratory, told MIT’s James Temple. “At first view, it looks really good.”

QuantumScape’s results so far, while impressive, are limited. After 10 years of work, the company has only published tests that were conducted on single-layer-cells. But batteries will need at least several dozen layers in order to work in EVs — a fact that leads many in the battery industry to be skeptical about QuantumScape’s claim of developing a battery that could power EVs within the next four years.

Scaling up the battery from a single cell to a full battery pack could be a much more difficult task. “Even though a material may look really promising at the small scale, in the scale-up these defects could become a bigger problem,” said Venkat Srinivasan, the director of the Argonne Collaborative Center for Energy Storage Science, according to Wired.

QuantumScape’s developments have only been seen in the lab and are still years away from commercialization.

A Long, Crowded Road Ahead

The battery field has recently seen an explosion in competition — there are many different types of solid-state batteries in development, and QuantumScape isn’t the only startup working on this problem. This is great news —battery development is complex and hard, and the demand for more efficient and safer batteries is only expected to grow over the next decade.

“This ultimately leads to EVs with greater range, greater reliability, and lower cost.” 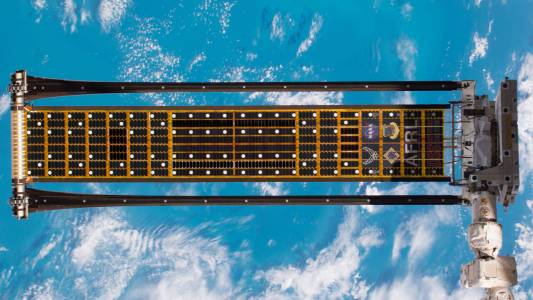 Capturing the sun’s boundless light in space could revolutionize how we distribute energy around the world.

Clean Energy
Solar panels in space could beam continuous energy back to earth
Subscribe to Freethink for more great stories
Subscription Center
Challenges
Video
Freethink
Subscribe
We focus on solutions: the smartest people, the biggest ideas, and the most ground breaking technology shaping our future.
Subscribe