Six years ago, Yoko Sen lay in a hospital bed listening to the sounds of medical devices all around her. As a professional musician, her sensitive ears betrayed her. They heard every noise that seemingly faded into the hospital walls, often unnoticed by the staff who struggle with alarm fatigue — a phenomenon that can cause desensitization to noise.

Hearing the shrill beep of a machine monitoring her health, she became concerned. Did the high-pitched sound mean she was healthy or were things about to get worse? Sen asked a nurse if something was wrong, gesturing to the noisemaker. The nurse replied nonchalantly, “Oh, this machine just beeps.”

The purpose of most hospital equipment is to monitor or sustain life, but the soundscape they create is an afterthought.

The purpose of most hospital equipment is to monitor or sustain life, but the soundscape they create is an afterthought. Not for Sen. Now, she is on a mission to design healthier hospital sounds.

Sen first wanted to find out what hospital sounds impacted people most. She talked to clinicians and patients, asking questions like, “What sounds do you hear in this room? Or “What is the most disturbing sound?”

“We set out to talk to people about sound,” she says, but “when people start to talk about sound, their stories are always about more than sound. It’s very human processing, sometimes very emotional.”

When staff members are stressed, Sen says, they tend to exhibit more noisy behaviors, like talking louder or slamming doors. So, at a hospital in Washington, D.C., Sen decided to clean up the chaotic sound environment by creating a relaxation space — a place for hospital staff to go to unwind. The space, called the Tranquility Room, is replete with comfy seating, low lighting, and ambient music, which Sen composed. She calls it “creating a culture of quietness.” The most important feature is that it sets a tone that clinicians can — and should — take time to relax, de-stress, and clear their minds.

Clinicians are bombarded by a cacophony of alarms and sounds — sometimes up to 942 signals per day.

Sen then focused on the other source of disruptive hospital sound: machine noise. These medical devices, with all of their beeps, buzzes, and alarms, are meant to save lives. But the roar of background noise isn’t just obnoxious for patients — it can be dangerous, due to a phenomenon called alarm fatigue. The ECRI Institute, a non-profit that provides evidence-based assessments of health technology, lists “Alarm, alert, and notification overload” on its Top 10 Health Technology Hazards for 2020.

When clinicians are bombarded by a cacophony of alarms and sounds — sometimes up to 942 signals per day, many of which are false alarms — they can become desensitized to the sounds. This alarm fatigue is the cause of an increasing risk that doctors or nurses will miss essential cues.

Almost a million Americans have a Medtronic heart device in their bodies, which is monitored with a remote gadget. Sen’s new notification tones are designed to be more pleasant to listen to. Or, as Sen says, they are “more human-centered, rather than engineer centered, or not centered on anything at all.”

Trained in classical piano, and as an ambient music composer and performer, Sen never thought she would combine music with human-centered design. Now, Sen can’t help but wonder why there isn’t more forethought when it comes to hospital soundscapes — especially if it can help reduce the dangers of alarm fatigue.

“We are working with hospital systems across the U.S.,” she says, “to use the awareness of noise and sound as a way to think about the entire experience design of the hospital.”

From the waiting room to the operating room, Sen says the sound environment must be more intentional.

That is her goal— one sound at a time.

Virology
At long last, we might have an HIV vaccine
Due to HIV-1’s extraordinary diversity, a vaccine needs to induce antibodies that can target many different strains. 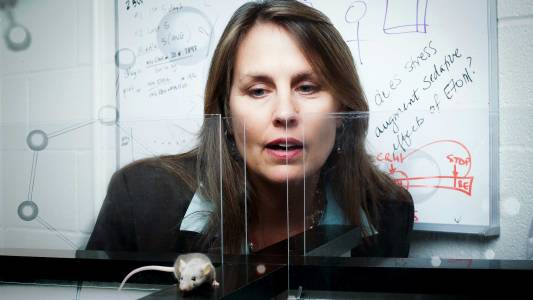 In our interview with neuroscientist Judith Grisel, she discusses the state of research on addiction and the brain, as well as society’s view of addicts.

Addiction
Addict-turned-neuroscientist on addiction and the brain
Subscribe to Freethink for more great stories
Subscription Center
Challenges
Video
Freethink
Subscribe
We focus on solutions: the smartest people, the biggest ideas, and the most ground breaking technology shaping our future.
Subscribe