For residents of certain West Coast cities, it was like an alien invasion. One day everything was normal, and the next day they were everywhere — electric scooters, all over the sidewalks, at every turn, as if dropped from the sky.

Just as quickly as e-scooters descended upon cities, they began generating controversy. Residents complained e-scooters were seldom parked in appropriate locations and were instead cluttering city sidewalks, obstructing paths for pedestrians and rendering walkways utterly impassable for people with disabilities.

This issue was compounded by the fact that most e-scooter companies failed to get city approval ahead of time — some companies launched their services with essentially zero notice, hoping to get regulatory approval as they went along. This created an adversarial relationship with many cities in which these scooters operate.

Even Better Than GPS

“Spin took the time to reach out and ask for our input about accessibility issues with e-scooters,” says Karolyn Campbell, executive director of the Disabled Rights Action Committee (DRAC), an advocacy group in Utah. “The company has made it a point to be compliant with the American with Disabilities Act.”

Spin, which has a permit to deploy its e-scooters again this year in Salt Lake City, is the only micromobility company to engage the DRAC, Campbell adds.

Salt Lake City was one of many major U.S. cities to experience both the convenience and annoyance of e-scooters. They were hailed by alternative transportation advocates as well as criticized for littering city sidewalks and impeding access for people with disabilities.

Drover AI can discern whether a scooter is on a sidewalk, in the road, or in a designated biking and scooter lane.

According to Campbell, one of the biggest problems with e-scooters is awareness. Most people don’t intend to park their scooters in an inappropriate location and make life more difficult for people with disabilities, they’re just oblivious.

To make people more aware, Spin has commissioned Drover AI to power their new e-scooter technology which uses computer vision to instantly alert users when they’ve parked in a restricted area, such as an ADA accessway, or they’re riding on a sidewalk.

“Riding a scooter on a sidewalk can be dangerous not just for pedestrians, but for the users as well,” says Maxime Veron, VP of product at Spin.

GPS technology is an astounding technological feat, but in a dense urban environment, GPS can be inaccurate by more than 25 feet, says Alex Nesic, co-founder and chief business officer at Drover AI. “When you get into a much more granular environment, GPS can’t tell the difference between the sidewalk and the curb 10 feet away,” Nesic says. “That’s where our technology comes in and provides value.”

Drover AI approaches this problem by attaching front cameras to a scooter and uses AI-powered image recognition technology to discern whether a scooter is: on a sidewalk, in the road, or in a designated biking and scooter lane. After a short period, the system develops a keen understanding of exactly where an e-scooter is positioned, allowing Spin to determine whether a user is riding on the sidewalk and annoying pedestrians or parked inappropriately and needs to be moved.

This e-scooter technology also delivers user push notifications that encourage proper e-scooter etiquette. E-scooters set off an audible alarm, alerting users to stop riding on the sidewalk, or send a message informing them they’ve parked in a restricted area and are at risk of incurring a fine.

Changing human behavior is notoriously difficult, but there’s hope these subtle nudges will induce better etiquette. “I do think the sidewalk detection technology will help address the problems we have here in Salt Lake City,” Campbell says.

Detecting a poorly-parked e-scooter is one thing; but it still needs to be moved to a proper location.

To date, e-scooter companies have resorted to paying contractors to roam the streets collecting e-scooters, stowing them in their pick-up trucks or converted vans and charging them at home. It’s a terrible labor and time-intensive process, not to mention it runs counter to many e-scooter companies’ promise of providing an emissionless alternative to automobiles.

That’s why Spin has partnered with Tortoise, a remote e-scooter driving startup in Silicon Valley.

Tortoise enables e-scooter companies to manage their fleet remotely. Remote operators can operate e-scooters from afar with an adapted Xbox controller and move them safely, at a low speed, to a location that doesn’t hinder sidewalk access.

Spin is featuring Tortoise’s technology as part of its bid to cities to deploy its service in an accessible manner. “The simplest way to think about us is we’re their moving company,” says Tortoise co-founder Dmitry Shevelenko. “But instead of having vans and trucks, we have software and drivers”

Of course, the service is only possible with Spin’s three-wheel e-scooters. The two-wheelers can’t stay balanced when driven remotely.

So far, the initiatives look promising.

The benefits of this technology would be shared by everyone. Modern comforts we often take for granted, like ramps for delivery people and automatic rear lift gates on cars, were originally designed for people with disabilities. Seeing e-scooters neatly parked in a designated area, where they don’t impede pedestrian traffic, would produce a similar result — more accessible sidewalks for everyone. 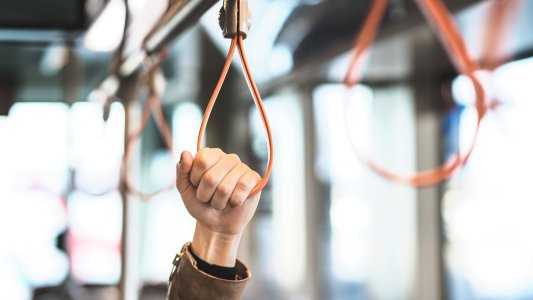 Cities across the U.S. are creating on-demand van transportation systems that work like Uber, but for the cost of a bus fare.