A new water purification tablet that simply and quickly decontaminates river water could help address a lack of safe drinking water across the globe.

“Our multifunctional hydrogel can make a big difference in mitigating global water scarcity because it is easy to use, highly efficient, and potentially scalable up to mass production,” UT Austin researcher Guihua Yu said.

The situation: For most people, getting clean drinking water is as simple as turning on the kitchen tap or pulling a bottle (or can) out of the fridge, but 2.2 billion people across the globe don’t have that luxury.

While most of them can travel somewhere nearby for safe drinking water, about 144 million people — mostly in Sub-Saharan Africa — must collect surface water from rivers, lakes, and ponds to drink.

Water purification options: Surface water often contains E. coli  and other bacteria that can lead to illness and even death, so it’s important that it be purified prior to drinking.

Boiling is one way to purify the water, but it requires fuel, which isn’t always affordable or accessible.

Solar pasteurization (using sunlight to heat the water to a lower temperature for a longer period of time) is another option, but it can take hours and doesn’t work if the sun isn’t out. A different process, called “solar distillation,” can also purify water, but the equipment used for it can accumulate microorganisms that cause malfunctions.

Meanwhile, the water purification tablets commonly used by campers leave behind disinfection byproducts, and researchers are still trying to determine how frequent exposure to those byproducts might affect human health.

The tablet neutralizes 99.999% of the bacteria in the water and is then removed.

The hydrogel tablet: UT Austin researchers have now created a water purification tablet out of a type of water-absorbing material called a hydrogel. This tablet makes a liter of river water suitable for drinking in about one hour, without creating any potentially harmful byproducts.

The tablet does this by generating hydrogen peroxide that reacts with activated carbon particles. That neutralizes 99.999% of the bacteria in the water, and after the process is complete, the tablet is removed.

The water purification tablets can also be used in conjunction with solar distillation systems to prevent the microorganism-caused malfunctions.

Looking ahead: The UT Austin researchers say the materials used to make these water purification tablets are inexpensive, and scaling up manufacturing would be straightforward. The tablets could also be made in different sizes and shapes for different uses.

They’re now looking for ways to make their hydrogels more robust and get them out of the lab and into the water of people in need.

“We are currently testing the capability of our hydrogels to kill more kinds of pathogens in water,” Yu told Freethink. “Other heavy metal ions [and] organic contaminants will also be considered in the future” for neutralization.

Engineering
Russians reportedly building a satellite-blinding laser. How would it work?
If Russia is able to build the laser, it would be capable of shielding a large part of the country from the view of satellites.
Up Next 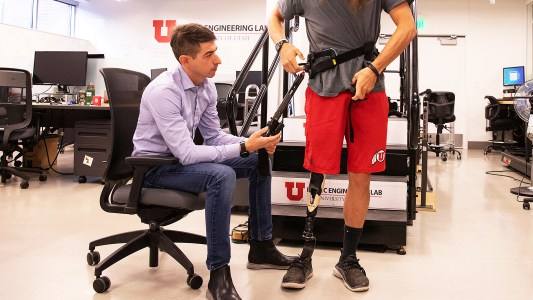 University of Utah engineers have built a robotic exoskeleton that gives people with prosthetic legs a power boost that makes walking easier.