The challenge: The proportion of the global population living in cities is expected to increase from 50% today to nearly 70% by 2050, meaning our already crowded urban streets are likely to become even more congested.

Jetoptera describes its Fluidic Propulsion System as “a bladeless fan on steroids.”

To free people from traffic, dozens of companies are designing VTOL vehicles that could quickly fly passengers across cities, like aerial Ubers or Lyfts.

Like helicopters, most of the VTOLs under development rely on propellers to produce the thrust needed for flight. While VTOLs’ spinning blades are typically smaller and quieter than helicopters’ large single blade, they do create noise that could be disruptive if we get to the point that fleets of VTOLs are flying overhead.

The idea: Jetoptera is taking a different approach, replacing the standard spinning propellers with a “Fluidic Propulsion System” (FPS) that it describes as “a bladeless fan on steroids.”

As Jetoptera describes it, this system sends a small amount of compressed air through backward-facing slits in the interior of a ring-shaped thruster. Due to something called the “Coanda effect,” this air creates negative pressure that sucks ambient air into the front of the thruster.

As a result, the amount of air that flows out the back of the thruster is up to 15 times more than what’s sent from the compressor. The thrusters can be positioned so that this air pushes against the ground during liftoff, and then shifted to propel the VTOL forward during horizontal flight.

The FPS has no moving parts that passengers could come in contact with, and based on research funded by the DoD, Jetoptera says the system is “the most silent propulsion method in the skies.”

“In places like New York, Los Angeles, and London, our aircraft wouldn’t be heard until it was about 200 feet away,” Andrei Evulet, Jetoptera’s CEO and CTO, told Future Flight in 2021.

The cold water: Unlike many VTOL startups, Jetoptera isn’t committed to making its flying cars electric — the current plan is to rely on gas turbine generators, meaning the vehicles might one day alleviate ground traffic, but they wouldn’t help solve the climate crisis.

“We’re agnostic about the power source,” Evulet told My Edmonds News in 2022. “While batteries are one promising source, battery technology is simply not advanced enough at this stage.”

“We don’t want to become a battery with wings — we need to be able to carry cargo and eventually people,” he continued. “So if we’re to be an electric-powered aircraft, someone has to invent a battery that’s better.”

Looking ahead: Jetoptera is currently developing several vehicles equipped with its FPS, including a two-seat commuter VTOL called the J-2000.

A quarter-scale model of that aircraft flew in 2019, reaching a top speed of 90 mph. They expect the full-scale version to have a range of 200 miles and a top speed of 200 mph, with a payload capacity between 450 and 800 pounds.

Jetoptera is also developing a VTOL for the US Air Force that is expected to reach speeds around Mach .8  (614 mph), about as fast as a commercial jet airliner. A subscale model of that design is undergoing wind tunnel testing, and Jetoptera expects to have a flyable demonstrator ready by 2025.

“These working models allow us to test our airframe and propulsion system designs … We hope by 2026 to have several prototypes that can carry people,” said Evulet. 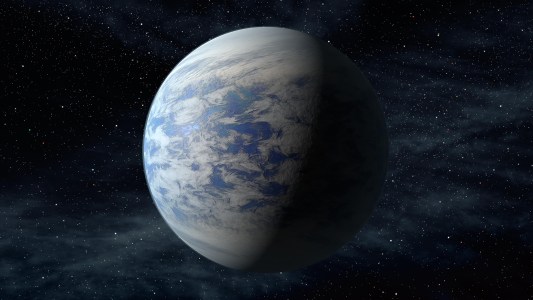 NASA has announced that it is developing the Habitable Worlds Observatory, a new space telescope optimized to hunt for extraterrestrial life.