Amogy, a startup founded by four MIT grads, has unveiled an ammonia-powered semi truck that can be refueled in just eight minutes — giving it a significant advantage over battery-powered alternatives.

The challenge: Heavy duty trucks account for just 1% of the vehicles on our roads, yet they generate 25% of global road emissions. Transitioning these super-polluters to green alternatives could have a huge impact on the battle against climate change.

Exactly what to transition them to isn’t obvious, though.

The lithium-ion batteries typically used for electric passenger vehicles can have long charge times — that makes them less-than-ideal for long-haul trucking, where downtime must be kept to a minimum.

Hydrogen-powered trucks — ones that convert hydrogen into electricity, producing water vapor as the only byproduct — can be fueled up as quickly as diesel trucks, making them a promising potential alternative to traditional EVs.

However, hydrogen-based transport will require complex new infrastructure. To use hydrogen in a vehicle, the element needs to either be compressed as a gas or cryogenically cooled as a liquid — and both approaches make it difficult to store and transport.

It’s developed a system that “cracks” the ammonia compound into nitrogen and hydrogen. The hydrogen is then run through a fuel cell to generate electricity, just like it would in a typical hydrogen vehicle.

The advantage to this approach is that ammonia has three times the energy density of compressed hydrogen and is liquid at ambient temperature, which makes it much easier to store and transport.

“Beyond its incredible energy-density and liquid phase at an ambient temperature, ammonia is an optimal fuel to achieve rapid decarbonization of heavy transportations because it is available globally with existing infrastructure already in place,” said CEO Seonghoon Woo.

What’s new? Amogy has previously demonstrated how its system can be used to power a drone and a mid-sized tractor. Now, it has scaled up the tech to create what it says is the world’s first ammonia-powered semi truck.

The retrofitted vehicle can be refueled in just eight minutes, according to Amogy, at which point it has 900 kWh of total stored net electric energy — that’s about as much as the Tesla Semi’s battery pack, which requires 30 minutes to charge to 70% of its range.

Amogy says it has test driven its ammonia-powered semi truck for several hours, but it has yet to share details about its range or performance. It plans to conduct “full-scale testing” before the end of January, though, so more information could be on the way.

The cold water: Amogy’s system might have roughly the same stored electric energy as a Tesla Semi, but that doesn’t mean similar performance.

Some of the energy from the ammonia will need to be used to power the process of splitting it into hydrogen and nitrogen, and then converting that hydrogen into electricity.

Those are steps that don’t have to be accounted for in a battery-powered semi, like Tesla’s, and it’s not clear if Amogy’s claim about  900 kWh of total stored net electric energy accounts for the conversion process.

“We look forward to further scaling and tackling other hard-to-abate sectors.”

While the startup’s ammonia-powered semi truck runs emissions-free, the standard process used to produce ammonia does generate carbon dioxide, so drivers would need to use “green” ammonia for the vehicle to be truly zero-emission.

(Battery EVs face a similar obstacle, since the electricity may originally come from burning coal or gas, but clean electricity, from renewables or nuclear, is easier to come by today than green ammonia.)

Looking ahead: In addition to putting its ammonia-powered semi truck through its paces on a test track, Amogy also plans to unveil an ammonia-powered tugboat in 2023 and finish retrofitting a tank barge for its first commercial deployment.

“First it was an ammonia-powered drone, then a tractor, and now a truck,” said Woo. “In the near future, we look forward to further scaling and tackling other hard-to-abate sectors, such as global shipping.” 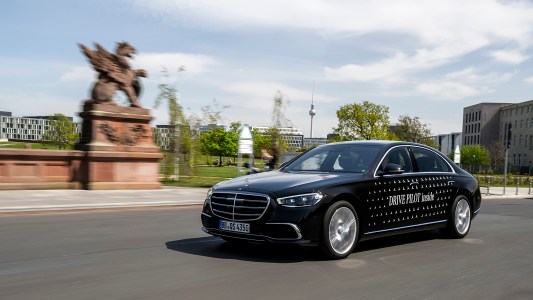 Mercedes-Benz has permission to deploy its Level 3 autonomous driving system, DRIVE PILOT, in Nevada, and California could soon follow.