Hydrogen fuel is an attractive candidate for a clean energy source, since it burns very clean.

But on Earth, hydrogen is almost always bound up with other elements, and separating it requires a ton of energy. Almost all hydrogen today is created with natural gas.

The main alternative to this process uses electricity, which is often generated via fossil fuels, thereby defeating the purpose, and clean water, also a precious resource.

But researchers with the University of Melbourne and University of Manchester have developed a way to harness solar power and the very air around us to produce truly green hydrogen.

By pulling water from the air and applying electricity provided by solar panels, they can rend the H2O molecules, producing pure hydrogen (H2).

Hydrogen fuel is an attractive candidate for a clean energy source, since it burns very clean. But acquiring it on Earth needs massive amounts of energy, and for some methods clean water.

The technology may one day allow for hydrogen production even in places severely lacking in water — like the Australian desert.

“We see an area that has no groundwater and think it’s unsuitable for hydrogen production. But there is always abundant fresh water in air,” study lead Gang Kevin Li, a senior chemical engineering lecturer at Melbourne, said in a statement.

“Even Alice Springs, which is in part of [the] desert, has around 20 per cent relative humidity. This is more than enough for us to produce hydrogen onsite using renewable energy.”

Hydrogen’s potential: There is great power in hydrogen fuel — enough to lift NASA’s rockets into space, the agency having turned to liquid hydrogen all the way back in the 1950s.

Handing gravity an L is only a small fraction of our hydrogen use, however; according to the federal Energy Information Administration, the majority of hydrogen consumed goes to refining petroleum (ironically), producing fertilizer, processing foods, and treating metals.

So, where’s our hydrogen-powered everything?

“There’s virtually no pure hydrogen on Earth because it’s so reactive,” Paul Ronney, a professor of aerospace and mechanical engineering at USC unaffiliated with the research, said.

According to Ronney, most of the hydrogen we have is made from methane, in a CO2 and greenhouse gas emitting process; turning water into hydrogen, via a process called electrolysis, requires electricity.

“To get that, we’re back to burning fossil fuels,” Ronney said.

Creating green hydrogen: The Melbourne and Manchester team’s device, published in Nature Communications, avoids that issue by using solar electricity. And in places where the device would be most useful — those where water is scarce — the sun often shines.

“Most areas on Earth with high solar and wind potential lack freshwater,” Li told Inverse. “For example, a desert is deemed a good place for solar power, but has no fresh water.”

Li and colleagues’ solution is called a Direct Air Electrolyser. By pulling water from the atmosphere and then using solar-powered electrolysis, the team was able to create hydrogen even in 4% relative humidity in the lab — “bone dry,” the authors write.

And that hydrogen is 99% pure, The Guardian reported.

The DAE uses a pair of metal plates that it runs a current across to split the water molecules. But in between those panels is a porous material steeped in a chemical which yoinks moisture from the air. It is estimated to be able to produce 93 liters of hydrogen per square meter an hour, the Guardian reported.

“If you have 10 sq metres of this unit, you can power a whole house … to replace your consumption of natural gas at home for cooking and heating,” Li told the Guardian.

For high-carbon industries and processes, the team eventually sees their technology as being able to be combined with other renewables, both enhancing their production and using the hydrogen fuel as a way to solve renewable energy’s storage problem.

By pulling water from the atmosphere and then using solar-powered electrolysis, the team was able to create hydrogen even in 4% relative humidity.

The challenges to come: The team’s next steps are to build 1 and 10 square meter DAEs for future testing, as their current prototypes are small. These more robust models will take on the desert climes of Alice Springs, in northern Australia, in a field test.

If they can scale up their technology, it may prove useful in helping to adapt green hydrogen more broadly as we push towards net-zero power sources. 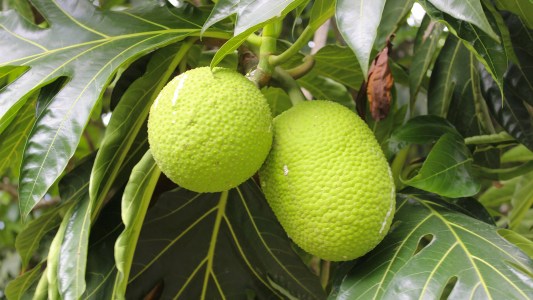 Ensuring food security over the coming century will be a major challenge. A new study suggests that breadfruit may be the answer.

Food
This strange fruit could feed the world during climate change
Subscribe to Freethink for more great stories
Subscription Center
Sections
Video
Freethink
Subscribe
We focus on solutions: the smartest people, the biggest ideas, and the most ground breaking technology shaping our future.
Subscribe