In an attempt to clear the winter roads (and make deicing easier on the environment, vehicles, and infrastructure), cities across the U.S. are exploring rock salt alternatives — and beet juice is one of the most promising.

That little quirk of chemistry has proven incredibly useful for driving in winter weather — by dumping rock salt on roads when it snows, we can prevent water on them from freezing (or melt ice that’s formed) until temperatures sink below 15 degrees Fahrenheit.

This can make roads less dangerous for drivers in the winter months — but those safer road conditions have a tradeoff.

After the rock salt dissolves, it can enter rivers and streams, killing some animal species and leading to high sodium levels in our drinking water. And because salt is corrosive, it also causes an estimated $5 billion dollars worth of damage to vehicles, roads, and bridges in the U.S. every year.

A rock salt alternative: Because the sugar molecules in beets can also lower the freezing temperature of water, cities in Minnesota, Michigan, Missouri, and even states that don’t begin with M are experimenting with ways to use the vegetable to deice roads in the winter.

Usually, this means mixing beet juice with water and salt to create a brine that can then be sprayed on roads. That doesn’t completely prevent salt from reaching the environment, but it greatly reduces the amount needed — and the mixture is more effective than rock salt alone.

“[I]f you put certain carbohydrates or sugars on salt, it enhances that performance of the salt so it works at lower temperatures more effectively,” Daniel Freeman, VP of operations for​​ SNI Solutions, a company that makes a beet juice additive for use on roads, told the Washington Post in 2015.

The cold water: While beet juice is a cost-effective rock salt alternative in some places, the cost of shipping and preservatives can make it more expensive in locations where beets aren’t typically grown.

“We tried the beet juice,” Brian Burne, a Maine highway maintenance engineer, told the Bangor Daily News in 2019. “The only reason we’re not using it is because it’s more of a Midwestern product, so we’re paying more for the additive.”

Scientists have also questioned the idea that beet juice deicer eliminates the environmental cost, noting that it can negatively impact insect species, something that should be researched further.

The big picture: Beets aren’t the only rock salt alternative on the menu — pickle juice, potato juice, and cheese brine are also being tested.

Instead of dumping things onto roads to melt ice, some places are trying to make roads themselves less ice prone — a project in Europe is embedding snow-melting metal meshes into asphalt highways.

These projects are still experimental (and costly), so for now, it seems unlikely that salt will be completely eliminated from the deicing equation, but by adding beet juice to it, we might be able to eliminate some of its negative side effects. 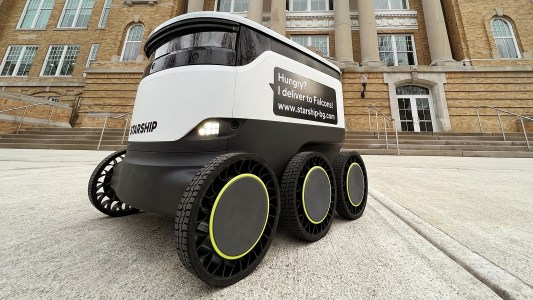 Goodyear’s airless tires are now being used by a fleet of Starship’s autonomous delivery robots on a college campus in the U.S.