Antoine Patton had a difficult childhood. He got his first full time “dead end” job when he was just 14 years old. He became a father when he was still a teenager. And a few years later, he was committing crimes. But Patton sought inspiration in the darkest place — prison — which he describes as “a reset button.”

Determined to break the cycles of poverty and crime, Patton got to work while he was still behind bars — teaching himself to code. He read an article about a “mobile tech explosion” and became determined to learn the secret language that would unlock the tech world.

When Patton returned home, he continued studying side-by-side with his teenage daughter Jay Jay. It was Jay Jay that helped him create and launch Photo Patch, a non-profit program and mobile app that connects children with incarcerated parents.

But they didn’t stop there. Just last year, Patton and Jay Jay launched Unlock Academy to teach others like them to code — the complex language that helped the father/daughter pair to bond.

Freethink spoke with the duo about finding inspiration in prison, favorite numbers, and a desire to help others.

Freethink: It’s really hard for anyone to teach themselves a new skill without a course or a program. There are even more barriers for people in prison. You’ve learned a new skill and you’ve made it pay off for you. What makes you so driven?

Antoine: Even while in prison, I knew that no matter what, I had to come home a better person, so that in my family’s eyes there will be this level of redemption, and things will go back to normal.

I was naturally always a nerd. I ran away from it. I didn’t tap into it. I barely graduated high school, and I failed a couple of classes in college just because I wasn’t serious about it. When I had all that time in prison, I would read all kinds of books. I was in the library every other day..

It just took me to tap into what I call my higher self and higher knowledge, higher education. I started taking that seriously. And it wasn’t just me. I may look like an exception, but I was incarcerated with so many other people who were doing the same thing for themselves. But unfortunately, a lot of those people now have life in prison.

I got enrolled into a college program while incarcerated. They helped me tap into my critical thinking and my worldview just really expanded. I started meditating, and yoga. I calmed my mind, and I purified my mind.

Before prison, I was in a very impoverished area, Buffalo, New York, third poorest city in America, a lot of death, a lot of crime, a lot of doubt, self-doubt. So, it’s rare for you to see someone have a vision for themselves and actually achieve it. More likely than not, people manifest their own death or their own imprisonment and things like that. So, I had to wash all of that stuff out of my brain and believe that I can — I can be anything that I wanted to.

I came up with this whole mantra of “the cages.” I knew that the real cages were my mental cages, my emotional cages, my spiritual cages, what was inside of me that was stopping me.

Freethink: Jay Jay, what was it like for you being reunited with your dad?

Jay Jay: The whole time my dad was in prison, I always loved him. Each time I was seeing my dad and talking to him and writing to him, it just made me so happy. So, when he finally got out, it was just the best thing ever.

One of the reasons I really wanted to learn how to code is because I wanted to be able to relate to him and bond with him and have some type of relationship with him, because all these years we didn’t. I ended up liking it too.

We already were alike in so many ways. We found that out through just talking on the phone and writing letters we both loved math, we both had the same favorite numbers. So, we already had a lot of the same interests.

Freethink: You both had the same favorite numbers? What were those numbers?

Jay Jay: Nine. I ended up finding out that my dad likes the same number nine too, and I was just even more happier. It had been my most favorite number ever.

Antoine: It was the same way with me, the number three always stood out. And three times three is nine. Three threes. While I was incarcerated, I went deep into a complex analysis and probability theory. It was ridiculous.

But then this course on Vedic math came, and it was just about all these different math tricks. And I started just seeing all these math tricks, especially with the number nine. And I just was, “Wow!” Every single multiple of nine, when you add the digits together, you get the number nine back. And Jay Jay and I are separated by 18 years. 18 is the multiple of nine, one plus eight is nine.

Freethink: You’ve created this app and website for people who have family members in prison. And now you’re sharing your personal life with the world. Is it ever hard to talk about?

Antoine: It was. I was in the tech industry, getting jobs. I didn’t want to talk about my criminal history. So yeah, it was hard at first.

Jay Jay: For me, it wasn’t too hard. Where I lived at the time, it was something normal. In that city, everybody is always in prison, everybody’s father or mom or something. It wasn’t something out of the ordinary. So, saying it or people knowing wasn’t scary.

Once we did move down to Florida, it was different because I didn’t really know anybody. I felt it wasn’t anything too bad or to be ashamed about because my father is a great person anyway. I don’t think we should be ashamed of it. So, when my dad was ready to talk about our story, I was.

Freethink: Jay Jay was three years old when you went to prison, and you didn’t see her again until she was six. When you went into prison, what were your first thoughts and fears about that relationship?

Antoine: We had a good bond, a really strong bond. Her, me, and her mother — we were love birds as teens, but separated before Jay Jay was even born. But I still made sure to be active in her life.

When I did make those poor decisions that led me to going to prison, it was devastating. So, I think that’s why, from the very beginning of me going into prison, my mindset was on how to be a better person. I knew I would never go back. I knew recidivism wouldn’t be a big thing for me, because the risk that I took affected somebody else’s life in a major way.

No, I’m not going to say it’s impossible — this system is locking up people for everything these days. But I don’t see me going out committing crime anymore like I was in my teenage years. So, it’s a blessing. And it’s great now I have a skill set where that doesn’t even need to be a thing.

Because tech has changed our lives so much, we’ve launched our own online school to teach other people who come from similar backgrounds to us, the same skills. Now we teach kids and adults how to build websites, how to build apps, how to get into the tech industry, how to interview for tech companies. We launched Unlock Academy last year.

I used to teach a lot in prison. And I was (like), “I’m ready to start an online school.” How do we help other people unlock these skills and unlock their true potential, their inner genius?

Freethink: Jay Jay, do you have any tips for other kids who are going through what you went through during your younger childhood?

Jay Jay: Stay happy and stay positive. That’s what I believe really helped. If you stay optimistic about things, it can help. Because that’s what helped me throughout my father being in prison. The whole time him being gone, I was never bitter, I was never sad, I was never mad at him.

I was always being happy for myself, for my mom. I wanted to make sure that I was always keeping them proud and happy.

Aerospace
New thruster tech that vaporizes metal could help clean up space
Hypernova Space Technologies’ metal-fueled propulsion system for small satellites could be a game-changer for space exploration.
Up Next 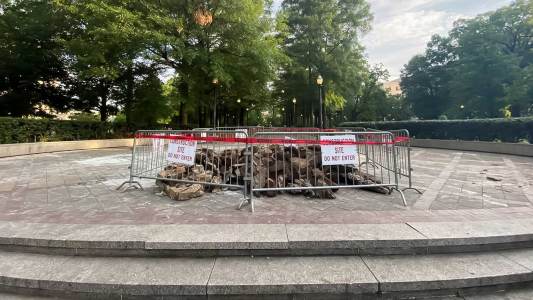 City officials are removing Confederate monuments in Virginia, Alabama, and several other Southern states in response to the George Floyd protests.