“I didn’t want to become known as the dung person.”

Karen Chin didn’t plan on becoming an expert on dinosaur droppings. She studied the fossilized dinosaur poop, called coprolites, as a graduate student, but she figured she’d branch out afterwards to pursue any one of her many interests. Plus, she adds with a laugh, “I didn’t want to become known as the dung person.”

Yet the more she learned about coprolites, the more she became captivated by the field’s unique potential to shed light on past ecosystems. By analyzing a dinosaur’s last meal, she realized, researchers could reconstruct food webs connecting ancient organisms.

“What I like about studying coprolites is that you wouldn’t be able to get this kind of information just by looking at a dinosaur skull and teeth,” Chin says.

How to Find a 75-Million-Year-Old Turd

Now an associate professor at the University of Colorado Boulder, Chin has published more than two dozen papers detailing fossilized dinosaur poop, making her a leading figure in the field of “paleoscatalogy.” It’s a small research area because, compared to dinosaur bone fossils, coprolites are relatively rare.

“You wouldn’t be able to get this kind of information just by looking at a dinosaur skull and teeth.”

For feces to become fossils, she explains, they need to be buried soon after they’re expelled, and in moist environments conducive to bacterial growth, such as lakeshores.

Luckily, she’s gotten really good at spotting the stuff, which isn’t easy. While droppings from medium-sized animals tend to keep their sausage-like shape, that isn’t usually the case for larger animals, she says. Because their poop has further to fall (up to 7-8 feet, for some dinosaurs!), it can break into pieces and end up as an unrecognizable pile.

To identify these coprolites, scientists like Chin look at several criteria in addition to shape.

First, researchers scan suspected scat for the presence of chopped up bits of plant matter, shell, and bone. They also analyze the sample’s chemical makeup for high concentrations of calcium and phosphorus, which is a giveaway for digested bone and tissue. Plant matter contains lower levels of these tell-tale elements, however, making fossilized poop from herbivorous dinosaurs even harder to find.

Finally, paleoscatalogists look for evidence that the suspected excrement was snacked on by poop-loving organisms, like dung beetles. In fact, burrows made by ancient beetles played a key role in confirming the identity of the first coprolites that Chin studied in 1996.

Karen Chin remembers “geeking out” over photos of the coprolite burrows — and a giant dung ball from Africa.

At a conference with her collaborator, the entomologist Bruce D. Gill, she remembers “geeking out” over photos of the coprolite burrows — and a giant dung ball from Africa. Gill brought the ball along to show that dung beetles must have dug those particular fossilized burrows.

“It was pretty funny and pretty exciting, because it not only helped make the case that these were coprolites,” she says, “but it also showed an interaction that we did not (previously) have evidence for.”

The pair’s finding suggested that dinosaurs and dung beetles co-existed 75-76 million years ago. Prior to this, the oldest evidence for dung beetles dated back to 66 million years ago — around the time most dinosaurs went extinct. She says their work can be useful to modern dung beetle scientists who are trying to establish beetles’ evolutionary lineages and how their feeding tendencies have changed.

What Fossilized Dinosaur Poop Tells Us About Ancient Life

Over the years, new and surprising discoveries have kept her engaged in the work, Chin says. In 2003, for example, she and colleagues found a coprolite from Alberta that contained chunks of extraordinarily well-preserved muscle tissue. “I didn’t expect that we would see fossilized meat, essentially,” she says.

“I didn’t expect that we would see fossilized meat, essentially.”

In another pair of papers, in 2007 and 2017, Chin’s lab discovered that large herbivorous dinosaurs fed on rotted wood, as well as the crustaceans living inside, which challenged the accepted notion that these large creatures strictly ate plant matter, due to the design of their teeth and jaws.

Chin hypothesizes that the dinosaurs may have dined on the crustacean-infested wood while they were reproducing. She compares it to a similar phenomenon in birds, which switch from seeds to insects when they’re reproducing to get the protein for egg yolks and shells.

Dinosaurs may have dined on the crustacean-infested wood while they were reproducing.

Other researchers are also moving the field forward, including scientists at Uppsala University. In 2017, Martin Qvarnström and colleagues developed a new technique involving X-ray imaging to analyze dinosaur dung. This method offers a non-destructive alternative to Chin’s technique, which relies on shaving off thin sample slices and examining them under a microscope.

Another group, led by geologist Vivi Vajda at the Swedish Museum of Natural History, published a 2016 study analyzing the pollen grains strewn inside coprolite samples found in Spain. By identifying the pollen in the coprolites, researchers can gain insights about the dinosaurs’ diet and the surrounding vegetation at the time. Her team found well-preserved grains from ferns, which Vajda calls the “crocodiles of plants” because they haven’t changed much since the time of the dinosaurs.

Karen Chin is most interested in questions about the dinosaurs’ diets, ancient geochemical cycles, and identifying exactly what kind of dinosaur a dropping came from.

Chin says there’s still so much to learn from coprolites. She’s most interested in questions about the dinosaurs’ diets, ancient geochemical cycles, and identifying exactly what kind of dinosaur a dropping came from, beyond just whether it was a herbivore or carnivore.

Answering these questions will be difficult, she adds, but “there are still exciting new discoveries happening all the time.” 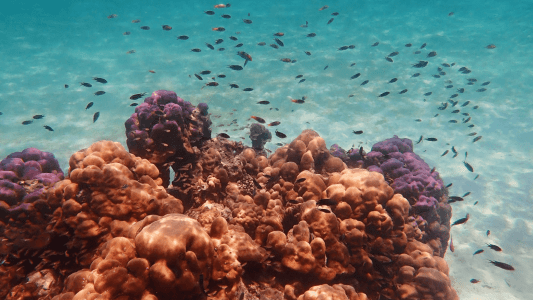 At current trends, more than 90% of the world’s coral reefs will be massively degraded by 2050. Researchers have found a species of stoney coral that has sparked new efforts for coral reef restoration.