“I got a master’s in marijuana” is no joke — not anymore. The University of Maryland School of Pharmacy has launched the first-ever medical cannabis degree program, and the inaugural cohort is taking a seat.

Brandon Coleman leads me through Greenhouse Wellness, a medical marijuana dispensary in Ellicott City, Maryland. Behind the bar stand three “budtenders,” helping patrons choose from the many options.

Coleman — one of the first students in the Medical Cannabis Science and Therapeutics master’s program — points out the tinctures, edibles, and joints. He picks up a tiny jar of Cannabis sativa extract and holds it out for me to smell.

I’ll admit, I’m a greenhorn. And according to Coleman, the lack of education about medical cannabis is a big problem, often causing barriers to people seeking out a drug that could help them. But Coleman says that research and public education will strip away “the stoner stigma.” This is one of many reasons he chose to enroll in the cannabis degree program.

He joins 149 other students for the two-year Master of Science program. The age range spans five decades, and students come from five countries. The courses range from the principles of drug action and cannabis laws to its history and culture. Coleman is most excited to learn about the plant as a medicine, which has personal significance to him.

After college, where he studied neurobiology, Coleman spent two years in the Air Force, then took a job as a firefighter on the special operations team at the Howard County Fire Department. But two years into his firefighting career, Coleman had a seizure at work. He had a second seizure a few months later. Because of his epilepsy, Coleman had to leave the job.

But he noticed that cannabis seemed to help him manage his epilepsy. That’s when he joined the team at Greenhouse Wellness — part-time, at first, but now full-time, overseeing purchasing and business relationships with growers and processors. Coleman hints at the idea that it was “meant to be,” and his enthusiasm for sharing the plant with others in need is evident. When the University of Maryland announced the medical marijuana degree program in the summer of 2019, Coleman saw it as a “first-ever” opportunity and applied.

“(These students) will be trailblazers in the industry. They will develop new areas of expertise in medical cannabis and create their own positions.”


Leah Sera, Clinical Pharmacist and Program Director of the University of Maryland School of Pharmacy’s Medical Cannabis Science and Therapeutics

Not everyone in the program are professionals in the medical cannabis industry. Leah Sera, the director of the program and a clinical pharmacist who practices in the field of palliative care, says that students come from all backgrounds — law, medicine, and even art. She says the cannabis degree program will give students the expertise to leap-frog over entry-level positions in processing and testing, or in fields like policy development, patient care, law, or advocacy.

“They will be trailblazers in the industry. They will develop new areas of expertise in medical cannabis and create their own positions,” she says.

The marijuana landscape has changed dramatically in just a couple decades — from being illegal in all 50 states in 1996 to today where 33 states allow some form of legal marijuana use. It began in 1973, when Oregon decriminalized marijuana possession, reducing the penalty to a $100 fine for possession of up to an ounce. But growing and selling were still illegal.

As the laws change, the legal cannabis industry struggles to keep up, challenged with many speed bumps. For example, the tax policy for legal cannabis lags. Small state-licensed cannabis companies have tax rates that are dramatically higher than other businesses of comparable size. Because marijuana is still illegal under federal law, a federal tax provision penalizes marijuana businesses, forbidding them from writing off normal business expenses, even if they operate legally under state law.

Additionally, many banks are reluctant to work with the legal cannabis industry, leaving businesses operating on a cash basis. And laws continue to shift, rendering the market unstable — a challenge for startups and small businesses.

While marijuana regulations and usage are quickly evolving, Coleman and Sera agree that public education is still minimal. Seeing the medical cannabis industry come out of the shadows and the need for an educated workforce motivated Sera to launch the cannabis degree program. A formal degree, from a reputable academic institution, is yet another step toward legitimizing a profession that was a criminal market not too long ago.

We need public education beyond the usual silliness of ‘This is your brain on drugs.’


Daniele Piomelli, Neurobiologist and Director of the University of California Irvine Center for the Study of Cannabis

Neurobiologist Daniele Piomelli is of the same mind. As Director of the University of California Irvine Center for the Study of Cannabis, Piomelli helped establish coursework in medical cannabis for students studying law or medicine. According to him, cannabis degree programs like the University of Maryland’s are the next step in a transformation surrounding the industry.

“We need public education beyond the usual silliness of ‘This is your brain on drugs,'” he says. “We need people with evidence-based, science-based, not Internet-acquired knowledge.”

Piomelli says that education and scientific understanding of medical cannabis trails far behind that of opioids. He attributes that to the Marihuana Tax Act of 1937, and the widespread criminalization of the drug. Since then, Piomelli says, people have been “sleeping at the wheel.” Research is slim and education minimal. Now that cannabis is becoming more accepted, the public has questions, and we need a workforce of professionals to research and educate. Piomelli calls this a shift that is long overdue.

Last year, Glassdoor reported that cannabis job openings increased by 76%, with the median salary 10.7% higher than the U.S. average. Now is a good time to get into the biz, and students graduating from the University of Maryland’s program could have an advantage. And, according to the Associated Press, in 2018, investors poured more than $10 billion into the North American cannabis industry, twice the rate of the three previous years combined. The cannabis degree program may be riding the wave of that sea change — further signifying the evolution of an industry.

Back at Greenhouse Wellness, Coleman isn’t worried about the struggles he might face as he moves into an industry where so much is still up in the air. His optimism is palpable. For him, the decision to invest two years in a master’s degree was easy. He says, despite the challenges, he sees a propitious future for the cannabis industry and and the prospect of launching his own business.

AI
The dawn of AI has come, and its implications for education couldn’t be more significant
AI like ChatGPT is forcing us to rethink education. But if we embrace it, it could empower both students and teachers.
By Vitomir Kovanovic

Neuroscience
How neuroscience can make us better parents
Kids’ brains develop in four main stages. Each has its own particular set of advancements and challenges for parents.
By Philip Perry

Psychology
The science of habits
Whether you’re trying to break a bad habit or start a good one, psychologists have some tips to get you started.
By Stephanie Parker | Knowable Magazine
Up Next 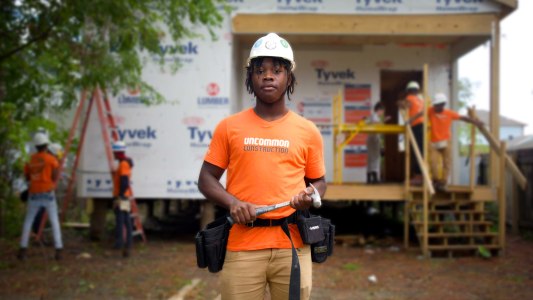 unCommon Construction offers a unique alternative to your typical internship for high school students. Their program turns build sites into real-world classrooms where interns learn the soft skills they’ll need to succeed in the workforce.

Series|Catalysts
Turning a construction site into a classroom
5:22
Subscribe to Freethink for more great stories
Subscription Center
Sections
Video
Freethink
Subscribe
We focus on solutions: the smartest people, the biggest ideas, and the most ground breaking technology shaping our future.
Subscribe